A couple of weeks ago, Mariner watched an episode of CBS Sunday Morning. It was a discussion about whether we should dismiss good art because the creator was an asshole. This was a follow up discussion to the recent PBS/Ken Burns special about Ernest Hemingway. It turns out Ernest qualifies as an asshole but has written some undeniably classic literature.

Mariner, though his opinion may be irrelevant, thought the CBS show was simplistic at best. The two primary guests were art critics. The first one took a clear stance that if the person is a misfit in social terms, their art should not be recognized. The second critic took a compromised position stating that we can acknowledge art in spite of the artist but the artwork is viewed by a jaundiced eye because of the artist’s behavior or, or, or because of the content of the artwork. 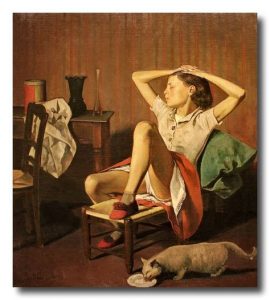 his genius had nothing to do with breasts but with the bold use of composition, forcing the viewer to mentally battle between strong lines and distracting colors. The second artwork of note was ‘Thérèse Dreaming’ by Balthus, a magnificent example of art talking directly to the soul. The Metropolitan Museum of Art said this about the painting:

“Many early twentieth‑century avant‑garde artists, from Paul Gauguin to Edvard Munch to Pablo Picasso, also viewed adolescent sexuality as a potent site of psychological vulnerability as well as lack of inhibition, and they projected these subjective interpretations into their work. While it may be unsettling to our eyes today, Thérèse Dreaming draws on this history.”

Note the words sexuality, psychological vulnerability, inhibition and subjective. These are words about subconscious motive. Good artwork passes directly by the conscious mind to speak to the subconscious – the home of the soul. Only when the emotional bonding bounces back to the conscious mind is it a confrontation between private sentiment and the social decorum of the conscious mind. To many people,  emotional feelings may seem embarrassing if made deliberately conscious. The defensive measure is to call the artwork questionable.

Good art always draws its significance from the subconscious. It can be a painting, a song (Mariner equates Whitney Houston singing ‘I will always love you’ as excellent artwork in vocal music[1]), a speech, even good architecture can raise a response from the soul.

&
[1] The Bodyguard, 1992. It took many months of arranging and rearranging this song by three giants in the movie business. It was the collective awareness of their sensitivity to their subconscious feelings that finally identified the song’s transcendent quality.