Mariner has read Andrew Yang’s book, The ‘War on Normal People’. The reader may recall he was the democratic candidate who espoused a monthly $1,000 stipend be paid to citizens of working age which had no relationship to what would be called wages earned from a job. His first chapter is about how the nation arrived where it is today. He cited some startling statistics. Just one of many as a sample: 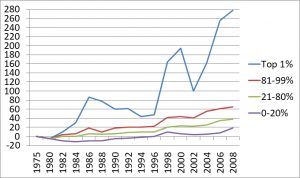 To clearly demonstrate the percentages in dollars, assume mariner gives the reader, a member of the top one percent, one dollar. Below is the number of dollars reader’s dollar will grow every two years:

These numbers seem really out of whack but mariner has charted these values in several different ways in past posts and Yang’s numbers are in the same ballpark. The big discriminator is that labor wages have remained stagnant as inflation has risen an average of 3.27 percent each year since 1980 for a total increase from 1980 of 91 percent overall – meaning that in real purchasing power labor wages are half what they were in 1980.

Is it any wonder that the working classes are up in arms and mad with the US government? This separation of economic circumstances may suggest why the stock market continues to set new records even while a different economy exists for the average citizen. [An issue for another post is the relationship between economic stress and the rise of racial prejudice in the working classes.]

One more chart from Andrew’s book:

Another statistic that mariner culled from the news is that the average person does not have the cash to pay an unexpected bill for $500. Further, the average disparity between white total assets ($34,755) and black total assets ($2,725) is astonishingly unbalanced – making race an economic issue that is bound to cause disruption.

As to Andrew’s arguments for guaranteed income, we have forgotten that in the more affectionate times of the Kennedy era, the US government prepared to pass the Family Assistance Plan – a plan endorsed by President Nixon – which would have provided a base income of up to $10,000 for every citizen beneath the poverty line. In a study performed to determine whether workers would stop working with such a benefit, it was found that men continued to work and women dropped out of their jobs by an average of five hours per week, typically to be with children.

“Human capitalism would have a few more tenets –

Mariner’s post grows long but it should be noted that job displacement, especially to the working classes, is a serious issue that may well damage the American economy – especially as artificial intelligence and global warming take their toll on available jobs for the working class.