Mariner had a closed door conversation with Guru. Amos wasn’t invited because he is deeply affected by the Donald reality. Mariner doesn’t know where Chicken Little is hiding due to the Russian military arriving in Venezuela.

Guru and mariner delved into the broader ramifications of the migration issue. They had to have some distance from the ravaging of the issue by Donald; his leadership is inadequate and he cannot process socio-political evolution.

As always in a discussion with Guru, the question of ‘why’ had to be answered first. Mariner started with some statistics to determine the scope of the issue:

Between 1990 and 2005 ◦There were 36 million migrations (an average of approximately 2.4 million per year);
◦33 million wound up in industrialized countries;
◦75% of the increases occurred in just 17 countries;
◦Immigration decreased in 72 countries in the same period;[1]

An interesting factoid from PewResearch.org is that the Mexico-to-U.S. link is the most popular bilateral migration path in the world. As of 2013, more Mexican immigrants (13 million) were living in the U.S. than all immigrants to Russia combined (11 million). Russia has the second largest number of total foreign-born residents, after the United States, which has a total foreign-born population of about 46 million.

Also from Pew Research, Countries with the fewest resources send lower shares of migrants. Although international migration is intrinsically tied with the search for jobs, people in the most impoverished countries may not have the money to finance a trip. The Central African Republic, the Democratic Republic of the Congo and Niger – countries with some of the lowest U.N. Human Development Index ratings and GDP per capita – all have less than 3% of their population living outside their borders. 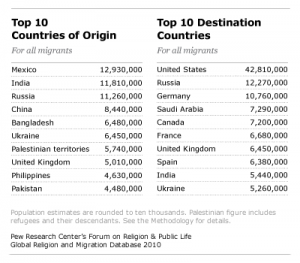 Then mariner and Guru focused on why migration happens. The first notable migration was the one 80-100 thousand years ago from Africa into the Middle East and Europe. A popular theory among paleontologists is simply that Homo sapiens, like any species, migrated because it could. Mariner is reminded of the French who have a larger percentage of citizens living around the world than any other nation. There must be a statistic somewhere that describes the high rate of citizen relocation within the US – just because they can. Some years ago, there was a statistic that said Americans move an average of every five years – for various reasons of course – but the bottom line is because they can. The first reason migration occurs: because it can.

Competing for the second reason for migration are economic hardship/opportunity, religious freedom, education, family ties, tyranny and war, famine and disease, and whimsy. All these reasons, save whimsy, can be listed in two groups of migrants: political reasons and economic reasons; the overlap is significant.

Lest one dismiss whimsy lightly, the migrations to the Caribbean, Central America and the South Pacific affect local political and economic circumstances in those regions. Years ago mariner sailed the islands of the Caribbean when virtually every island had a unique culture and distinctive value. In less than ten years, big time commercialism wiped out the colorful, fragile and balanced nature of these islands.

Another top-down migration occurred in Puerto Rico in the early 2000s when billionaires seeking to reduce taxes bought all the good shoreline and built magnificent castles they called ‘resorts.’ This in no way benefited the Puerto Rican economy and put out of reach the better shorelines that Puerto Rico could have leveraged.

Corporations migrate as well and are pushing the world economies into a new age of international finance. And, oddly, the Internet allows migration without ever leaving in the first place but, as the 2018 US election proved, Russian political influence affected US politics as much as a cruise ship docking at a small island in the Caribbean – without ever leaving Russia.

Given the discourse above, whether hardship or whimsy, migration happens because it can. The next post will look at migration from the opposite side, immigration.

2 thoughts on “Why Migration”