Think first of someone with the talent of an artist: that intuitive awareness that most of us can appreciate but never emulate; think da vinci; think the Statue of Liberty by Bartholdi and Eiffel; think Eiffel Tower by Eiffel; think the Vietnam memorial by Maya Linn; think Frank Lloyd Wright. These artists have intuitive creativity enriched by a requirement for function – Pablo Picasso and Andy Warhol need not apply. Now you understand the intuitive genius of Tom.

Tom is not famous; his artwork is not easily reproduced nor, perhaps, not widely wanted in an age when upscale homes must flaunt expensive materials, artificial elegance, Pier One decor, and look-alike neighborhoods. Tom never considered himself an artist. That awareness probably would have restrained his creative eye and certainly would have affected his enjoyment. Tom’s career as a PhD in soil microbiology and working for large agricultural chemical manufacturers similar to PPG and Uniroyal also was creative when he was presented with a new biological chemical to analyze or sent to a golf course or a farm or park because someone had to identify an unknown cause for poor plant performance. It was Tom who sent mariner a bottle of “stuff” to keep his Poinsettias from growing lanky after Christmas.

Tom had a dream. Long before he retired, Tom began drawing his dream house. Drawings that eventually had detail like how many square-nut half inch bolts he would need. He kept his drawings on laptop software to retain measurements and scale and how many two-by fours are needed – as if Tom knew what a 2×4 was. If he needed one, he would cut down a tree, cut the tree into large planks, dry the wood for a year in a specially heated school bus AKA wood drying kiln, run the plank through a planer and jointer, and then cut 2×4-inch pieces (real 2x4s, not 1 5/8 by 3 5/8).

Tom has a loving and extremely forgiving wife. She asked, as Tom finally retired and committed himself to building the house, “How long?” “Oh, about 4-5 years,” he said. Tom didn’t mention that first they would have to build and live in a small house and giant workshop. Tom quickly gained a reputation for identifying a project – which, one discovered, required another project before that one, and another before that one, and another before that one. The reader and mariner will go to a lumber yard on Saturday to buy some materials. When Tom said he was ready to start framing, that meant he had to build a sawmill, buy a school bus, retool the front-end loader so it could function like a fork lift, cut down and square 20 acres of trees, dry the bulk lumber for a year, cut the rough wood into framing pieces, and make massive steel plates to hold trusses together.

Tom is a skilled welder. By welding this and welding that, he has created, resurrected or modified tools from broken angle iron to major equipment like forklifts, front-end loaders and jeeps – redesigned to achieve unique tasks. The home handyman envies Tom’s collection of used and restored heavy duty saws, planers, jointers, sanders, routers, endless jigs and drills. Mariner wanders Tom’s workshop in awe of the nameless tools and devices made to accomplish unique tasks on a grand scale. For example, to turn the bus into a kiln, he welded steel drop down covers for the bus windows. These allow regulation of temperature; he installed a large heater – some would say a small furnace – to achieve the high temperatures needed.

Tom also is a perpetual visitor to auctions, sellouts of closing stores, lumber yards, farms and private sales of lumber, steel, plumbing supplies (Tom could start a museum about plumbing and heating), and, as his wife, the reader, and the mariner might consider – junk. One must admit that it is junk but Tom sees in it an artful reuse for a future project. Artful, indeed, as his artist’s eye will transform it into a tasteful creation or a needed function. 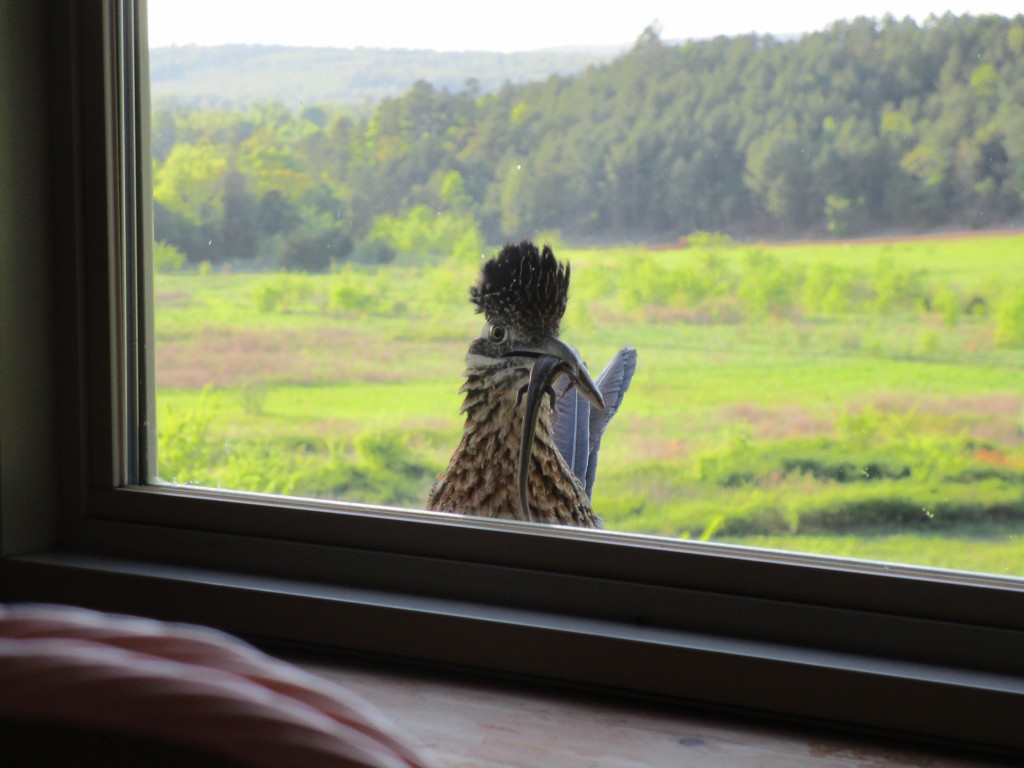 1-Sharp Tailed Grouse with skink for breakfast; Serengeti in background.

Tom is blessed that he owns 120 acres as his share among his siblings. The house site sits on a high hill overlooking a large field that once had grazing cattle but now has an idyllic Serengeti appeal. Wildlife abounds in this remote region of Arkansas. Deer families roam the ‘Serengeti’ as if they were Thompson’s Gazelles. An unexpected visitor for those not familiar with this part of Arkansas is the domestic but feral hog; not the razorback or the peccary – but a relative of Wilbur. They are destructive as hogs tend to be and willingly tear up gardens much worse than Iowa rabbits. Tom converted his father’s cattle trailer – made from cattle fence and metal posts – into a hog trap that catches them alive. Tom and his wife make sublime smoked pork! 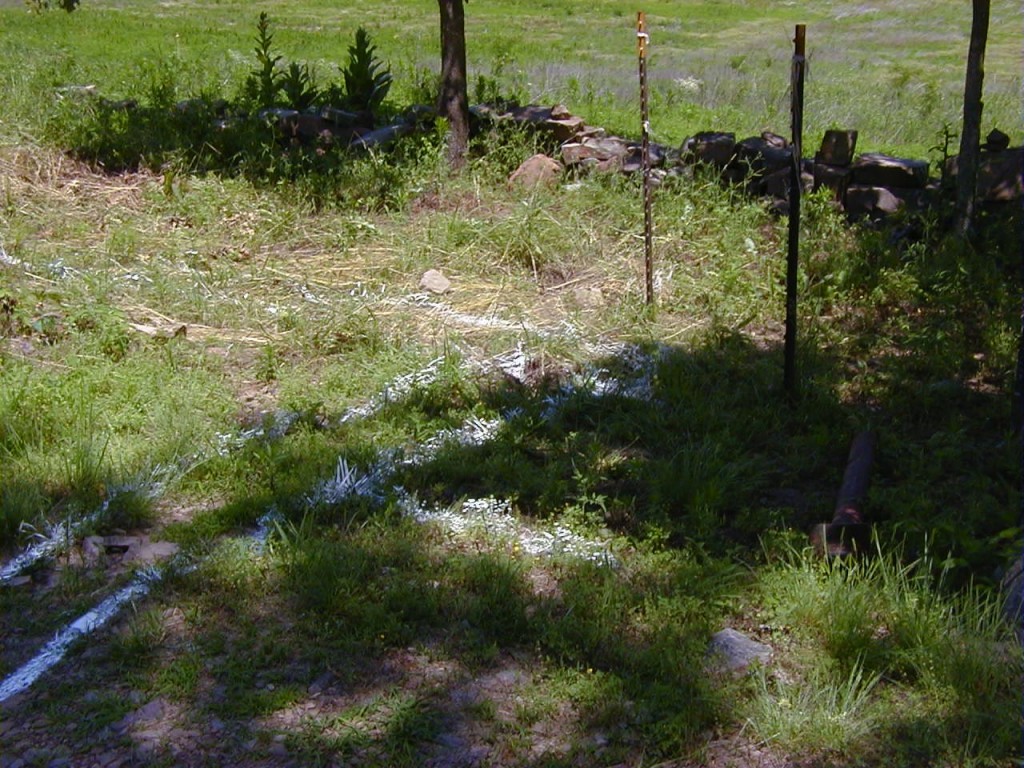 The project began in earnest around 2003-2004 when Tom laid spray paint lines on the location. (More in another post.)