After removing several hellish stumps and after pouring a massive concrete pad and waiting a good while until it dried, Tom began putting together columns, beams and trusses. This is not a standard frame; columns are six by six inches with a few eight by eights; columns are bolted to iron brackets buried in the foundation wall (see Fig. 1). Figure 1 steel posts that will be buried in concrete to receive weight from posts. Note the bolt hole that assures the posts will never move even in a tornado!

usses are six by eight or ten depending on the load. An intricate truss structure strong enough to support two homes will rise into place with the help of a giant crane.

When the house is completed, this massive truss and beam will come to life as a work of art. One can watch stress and load move across this superstructure as though it were flowing water – a poetic edifice that induces wonderment.

The entire house is encased in wood: ceilings, walls, nooks and crannies, and floors except for the main open space. The mariner counted at least eight kinds of tree lumber in the house – including a hackberry wall in one of the baths. One doesn’t use hackberry very often because its markings tend not to be stable. Tom pulls it off, however, in a striking pattern.

Anyone who has built a house from scratch knows it is not a one step forward experience. There are one or two steps backward as well. 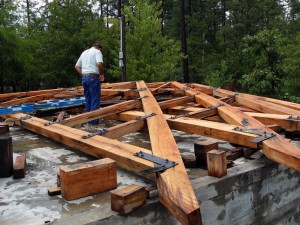 Tom had just raised the trusses over the kitchen and bedroom on the first floor when a severe Arkansas storm leveled the superstructure – 6×8 inch beams and all. Further, as anyone knows who has taken on a similar project, there are those days… A few photographs to show backward steps:

Finally, one can see the end in sight, er, not 4 or five years – more like 11 and counting. Being a guest in the home is a breathtaking experience mariner is unable to represent in this post. It is a piece of art in the Arkansas backcountry.