When mariner was young his father was attending seminary. His father was entertained by pop psychology, a term that implied, through simplistic descriptions, the behaviorisms of human beings. Mariner has carried this shorthand forward and often identifies someone in simplistic ‘pop psych’ terms. Below are two examples which the reader may recall from older posts but are worth rereading to distract you from the doldrums of being sheltered-in.

֎ Human behavior is of three types: What people, Why people and How people. The ‘what’ person must understand what actions the situation requires; often they have lists of what to do and through these lists understand the reality of things. ‘Why’ people can’t understand the reality of things unless they know why something exists and its relationship to a multifaceted reality. Understand that everyone makes lists; ‘what’ needs the list first to comprehend – ‘why’ makes the list last after comprehending. Mariner confesses to being an extreme ‘why’ person.

At one point in his life, mariner was a supervisor for a computer programming unit. A time came when another supervisor, a woman, was leaving the company. The manager decided to merge the two groups keeping mariner as the supervisor. Mariner had to learn the functions of the other group so he visited the woman to learn about its operation.

She sat at a computer screen and proceeded to read a list of sixteen tasks. When she finished, she said to mariner, “Got it?” Mariner said “No”. She turned back to the computer screen and repeated the list. “Are we good?” she said. Mariner said “No”. Showing frustration and disdain, she said “How in the hell did you ever become a supervisor?” It is true that ‘what’ and ‘why’ people don’t mix well. Fortunately for organizations, there are ‘how’ people. ‘How’ people make good managers because they understand the perspective of both ‘what’ and ‘why’ people. ‘How’ people are good problem solvers; their downside is their preoccupation with pragmatism and have little regard for the artful side of life. Interestingly, many trades have high numbers of ‘how’ people.

֎ A second pop psych example is derived from the shapes below. Decide which one you like best before reading on.

֎ Pop psych became mainstream in the 70’s and 80’s with the Myers-Briggs Type Indicator. Mariner and many others think it was an example of jumping the shark. How many readers are old enough for someone to have said to them in a condescending way, “I’m an INTJ”. 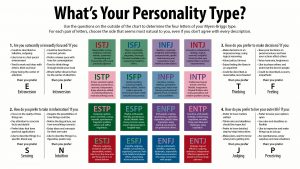 What makes pop psych less than prophetic is the fact that no one is a pure type. Virtually everyone has a dominant characteristic along with one or more subordinate characteristics. Still, many folks clearly represent one type or another.

Have fun pigeonholing everyone you know.