In many ways, this post is about the inability of the brain to process probability. The reader may want to reference “Our Brain and Probability” posted on July 4 2013. It is also related in principle to a recent post “A Cup of Water” posted on July 10 2014 that referenced a desire for short wins in spite of long term loss.

The mariner had a twenty minute discussion with a good friend about (1) possession of guns (2) gun legislation and (3) economic politics. Mind you, this friend is one of the most caring individuals I know. The friend is continuously going beyond the norm in sharing time, energy and concern for others. In every conversation the friend is courteous and polite. In addition, it should be known that the friend is politically conservative and is a hunter.

In April 2013, a Washington Post/ABC News poll was taken of members of the National Rifle Association (NRA): 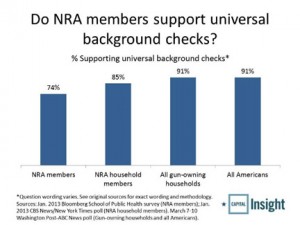 In addition to the poll above, 90% of public citizenry favored restrictions on assault weapons. Yet, no legislation has passed in this regard.

For a comparison to give behavioral weight to these statistics, each year 1 in 492 will die in a traffic related accident. 1 in 356 will be assaulted by a firearm but the chance of suffering from a firearm discharge is 1 in 6,509. The mariner gleans from these probabilities that assaults involving firearms is more common than dying in a traffic accident but actually dying or being injured by firearms is relatively rare. Perhaps the reason assault is so common is because too many individuals own guns – especially those we don’t know own guns and likely are the individuals we would prefer not own guns.

These statistics suggest that, given the second amendment, everyone has the right to own guns. However, we should know they have a gun. Assuming bureaucratic processes are effective, those we prefer not to own a gun can be weeded out of the gun-owning citizenry. The least intrusive and most effective policy to reduce assaults is to (a) have fewer people carry guns and not have ‘stand your ground’ defenses (b) decide who can carry a gun. Both require gun registration.

The reader now has enough background to move on with his conversation with his friend.

The mariner first broached the gun issue by asking whether the friend supported a policy that everyone has the right to carry a loaded weapon – even into churches and places of employment. He was in absolute agreement and immediately cited the second amendment, particularly the phrase “right to bear arms.”

“How would you like it,” he said, “if someone ran up to your wife at gunpoint, knocked her down and stole her purse? She has the right to protect herself and the thief should learn right away that crime doesn’t pay.”

The mariner’s brain was spinning in several directions. He had the courtesy not to immediately suggest, “But the gun is probably in the purse.” The mariner was considering, too, that this type of assault is why assault by a firearm is more common than fatal car accidents. It is quite likely the thief truly did not want to fire the gun and risk the engagement of witnesses, let alone twenty years in prison for taking a purse. Should the wife actually pull her gun and fire, she would be judge and jury and the thief would get an execution on the spot for taking the purse. It’s okay, though, because she stood her ground.

The mariner’s mind flashed back to the wild west of the nineteenth century where there was little law enforcement and one literally had to defend one’s self because no one had cell phones.

The news programs on television carried a story about a man who shot his soon-to-be bride through the front door with a shotgun without knowing who was at the door. The mariner asked about this phenomenon of shooting underserved family members and friends, especially about the small daughters who were instructed by their father to shoot through their bedroom door if anyone tried to open it. Of course the daughters killed their father.

The friend’s solution is that no one should be allowed to carry a firearm without full training in how and when to use a gun. The fallacy in this response is that assault and death are blamed on anything except the gun itself. Further, the assumption that there are individuals left who have yet to own a gun suggests not many would submit to training because they already have their guns.

The mariner inquired about a compromise, say, anyone can carry a gun but society should know that person has a gun.

“That is gun registration,” he said. He was more resolute in his objection to registration than the hypothetical circumstances we had been talking about. “If they [the government] know I have a gun, they can come and take it from me.”

“But the second amendment…” He cut the mariner short saying no one was ever going to take his gun. If they know, they can do whatever they want. He was growing irate at this point so I shifted to politics.

The mariner said, “Did you know that most of the money for NRA comes from arms manufacturers? It seems registration would expose their profits and the extent of manufacturing.”

“I don’t care where the money comes from. Without the NRA lobby, the common citizen would lose their right to bear arms.”

Knowing the conversation had to end soon, the mariner asked one last question about data from the chart above, that a majority of NRA members feel that gun registration should be passed. The friend shut off that line of thinking by saying everyone has a right to their own opinion.

It is obvious that probability, logic and practical solutions are not part of a discussion on firearms. The mariner felt the conversation went in circles, casting off conflicts by disassociating the gun at every turn. Whatever is in question, there is an excuse. The mariner is reminded of the phrase, ‘guns don’t kill people; people kill people.’ The appropriate phrase would be …’people with guns kill people.’

Like any strongly held opinion, belief becomes stronger than practicality or truth. Everyone has beliefs that are sacrosanct and will not change their beliefs for reasonable solutions. The best example right now is the Israeli-Palestinian conflict. Hamas (and many other Arab sources) believe Israel should not exist. They will never change their minds about this. As adamant, the Israelis will never give up Jerusalem.

It’s the short win that counts, not long term rationality. It’s the natural mind-state that does not process probabilities but instead says, “You gotta play to win.”

While not understanding the devotion to a gun, or the paranoia about not having a gun, the mariner understands the power of belief. Belief most often is a barbiturate for our genuine, perhaps unknown anxieties. The mariner has a strong reaction to matters of privacy and personal security. He is reminded of primitives who thought a photograph stole their soul. He is irritated that his profile, location, personal matters and buying habits are taken without permission and sold. He was never asked for permission nor was there recompense. The mariner uses secured web browsers that prevent his computer IP address from being known. Still data is gleaned for tendencies and preference even without a name, so eager are data hucksters to fill their clouds. No data is omitted, including medical records, family history and friends.

The mariner is aware that in the future, integration of personal data is what will enable a much richer life. Culture is changing such that society is better served with unification of human data. Still, the mariner is old fashioned and considers his private self his own definition of who he is and does not trust others telling him who he is. It is disturbing that others know what car he will buy before the mariner does. Have hucksters stolen his soul?

Does this sound similar to the friend who does not trust others without a gun by his side? Does the gun advocate cling to a culture long faded from the true fabric of the twentieth and twenty-first centuries? Do privacy advocates cling to the concept that there is no real definition of themselves in society other than their own perceptions, that one has the right to create one’s own, independent life?

What belief will you not change despite overwhelming reasons to modify your belief? There are none among us without beliefs that give us meaning and protect each of us from our insecurities.