There was enough curiosity about Cybele: What is it? Who is it? How do you say it? Why is it a holiday?…. The mariner decided to do an old fashioned treatise about Cybele as a way to cover all the questions. First information: Cybele is pronounced like the last two syllables in “possibly” with an added but diminished “uh” inbetween, SIB’uh lee.

There was a period of time from about 7500 BCE until 4000 BCE when human civilization began to show signs of organized thought, that is, something that looked like it may be perception beyond naturalism, perception beyond anthropomorphism. The first challenge to be answered was, “Where did all these people come from?” “How did they get here?” Without science, the only answers were myths.

The earliest religions evolved from these primitive myths to be followed by modern western religions that emerged from about 550 BCE until 500 CE. It is interesting to note how similar, even today, the rites, holidays, theologies, behaviors and celebrations continue.

In antiquity, c6000 BCE, Phrygia was a kingdom in the west central part of Anatolia, in what is now Turkey, centered on the Sakarya River. Phrygia was a region of Anatolia whose people spoke Phrygian. Its main cities included Ancyra and Gordium. Phrygia included the Troad, whose main city was Troy. The early Phrygians were fishermen; Phrygia gained prominence only after the 8th century BCE during the Hellenistic period, when the area was settled by Gallic Galatians and renamed Galatia. 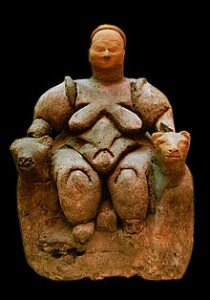 Photograph. Seated Mother Goddess of Çatal Hüyük: the head is a restoration. The Seated Woman of Çatalhöyük (also Çatal Hüyük) is a baked-clay, nude female form, seated between feline-headed arm-rests. It is generally thought to depict a corpulent and fertile Mother Goddess in the process of giving birth. Cybele may have evolved from an Anatolian Mother Goddess of a type found at Çatalhöyük, dated to the 6th millennium BCE.

MYTH
According to myth, Cybele loved a shepherd named Attis. Because Attis was unfaithful, she drove him insane. Overcome by madness, Attis castrated himself and died. This drove Cybele into great mourning, and it introduced death into the natural world. But then Cybele restored Attis to life, an event that also brought the world of nature back to life.

Attis’s return to life took the form of his being changed into an evergreen tree – the basic idea underlying the myth is the annual vegetation cycle in spring when nature comes to life. Eventually, the Attis myth became an annual event in which worshipers shared in Attis’s “immortality.” Each spring the followers of Cybele would mourn for the dead Attis in acts of fasting and flagellation. By 300 CE, the Romans had Romanized Cybele, now mother of all gods, into a lavish celebration of eating and merriment (Does the reader recognize the word ‘celebration, celebrity’ from the Latin ‘celebrare’ or the name Sybyl, varients: Sybil, Cybil, Sibil; Sybella from Greek Sibulla”Σιβυλλα (Sibylla), meaning “prophetess”? And ‘sibling’ – archaic ‘god sibling’ transforming to Goddaughter and Godson?)

Festivals and cults in this document are limited to common practices in order to shorten the document and to clarify relationships to other modern practices. Christian similarities are noted. Throughout early centuries, Cybele was a Goddess in Anatopia (sixth century BCE) and was adopted by Phrygia and Greece (sixth century BCE), and Rome (218 to 201 BCE when Rome officially adopted her cult during the Second Punic War after dire prodigies, including a meteor shower, a failed harvest and famine seemed to warn of Rome’s imminent defeat).

In Greece, as in Phrygia, she was a “Mistress of animals” with her mastery of the natural world expressed by the lions that flank her, sit in her lap or draw her chariot. After a short period of time in Rome, Cybele’s origin was reinterpreted as Magna Mater (“Great Mother”). The Roman State adopted and developed a particular form of her cult after the sibyline oracle recommended her conscription as a key religious component in Rome’s second war against Carthage. Cybele’s Roman mythographers reinvented her as a Trojan goddess, and thus an ancestral goddess of the Roman people by way of the Trojan prince Aeneas. With Rome’s eventual hegemony over the Mediterranean world, Romanized forms of Cybele’s role spread throughout the Roman Empire. Cybele’s special holiday was Megalisia. 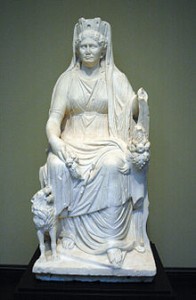 The role of Cybele exists today, especially in the Holy Roman Catholic Church, as Mary, Mother of God. In particular the Eastern Orthodox, Oriental Orthodox, and Eastern Catholic Church, Mary plays a more active role in liturgy. Its literal English translations include “God-bearer”, “Birth-Giver of God” and “the one who gives birth to God.” Less accurate translations include the primarily Western title “Mother of God” (Latin: Mater Dei). One of the more serious debates at the Nicene Council in 325 CE was whether God was the ultimate creator (as in definitions of the Trinity) or, because God and Jesus were of one spirit and Jesus was of human form, it follows that a human had to create God (Greek term: Theotókos.) The Trinity interpretation prevailed. The mariner speculates that at the Nicene Council, Christianity became a wholly paternalistic religion. From the book by Alice Lucy Trent: “….overwhelming historical evidence that the world’s earliest civilizations (covering the vast majority of earth’s history) were feminine in orientation, religious, social, and political.” Just as with the Roman Empire, Cybele was reduced in power from creating all things to one of significant recognition as Mother of Gods but not as the creator of all things. Until the Nicene Conference, Mary, AKA Cybele, had a role similar to the Iroquois Confederacy (American Indian’s creator Mother Earth plus female dominance in daily culture); in Sumatra, Minangkabau view women as the foundation of life and, therefore, the foundation of the entire social order.

[[ Cybele can be considered an influence on both the Old Testament and the New Testament and seasonal Christian rituals because Roman versions of rituals, including Cybele’s, were practiced in the Middle East at the same time that early New Testament documents were written. Further, on his second visit, around 50 CE, Paul spent three years proselytizing in Antioch and other large cities. It was in Antioch that the term “Christian” is used for the first time.

It may be serendipitous to the future of Christianity that Greeks, Jews, and Assyrian Semites – who still reflected Anatolian culture – had large populations in western Turkey and southern Greece during the Roman Empire; Rome contributed a common government and a common cultural perspective and a governance model referencing citizens, senators, Trumpian emperors and employed illegal immigrants also known as slaves. The Roman style of government still dominates the western world; the mix of common ancient mythologies, Indo-European language, familiarity with rituals about Greek and Roman gods, Judaism – all of which evolved from Anatolian culture – virtually mandated that Christianity would move to the west and reflect similar celebratory styles. The Holy Roman Catholic Church still reflects a mythological model similar to the Pantheon.

One can’t help but find similarities across the centuries. For example, the introduction of death by Cybele and eating the forbidden fruit in Genisus 3; mourn for the dead Attis in acts of fasting and flagellation around Easter dates AKA asking forgiveness and rebirth and the season of Lent; the celebration of spring through all the ages has been present in some form from early Antonian castrations to Roman high-dollar orgies; the female role of creating life and managing nature is similar to the Iroquois Confederacy that was not on the path of religion in the Middle East; the strong gravitation throughout of celebrating the seasons by associating them with early myths; finally, the similar requirement between Judism (Moses) Islam, (Mohammed), Christianity (Jesus), and Buddhism (Siddhārtha Gautama), to have an intermediary between man and God ]]

Looking back in the abstract, Cybele was the most influential “person” in Assyria, Greece, the Hittite Empire, Israel and intermediaries who lived on a truly fertile crescent. It is the same geography where humans first invented economic farming; it is the same geography and culture that produced Jesus, Mohammed and not far away, Buddha. Only a friendly, quite abundant Mother Nature would give Homo sapiens the time and energy to create a new iron age, farming, and three new religions.
Thanks to Cybele. 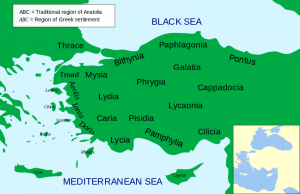