Below are random thoughts collected from mariner’s alter egos about trends in society and history that are too large to be noticed daily and so slow in impact that, today at least, they don’t matter.

֎ Migration from the coasts.  Axios, an online news source, reports that a trend is well underway which involves a significant number of people relocating from the coasts and current centers of commerce to twenty heartland states. Three major causes are the ability to work from home, the internet enables large corporations to relocate for tax purposes and an awareness of the impact of global warming on the coasts – ocean levels are expected to rise one foot by 2050. Map below: 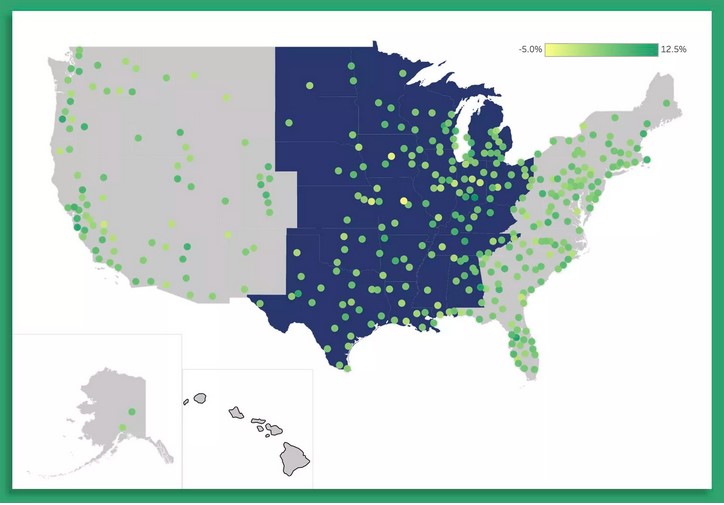 Mariner mentions this trend because it is a shift in winds by the nation’s cultural ideology about what it means to be successful. Since the 1960s one was considered upwardly mobile and successful if they were able to escape the local scene and become part of the world of big-time success, typically large corporations, universities and the world of the Fortune 500. One could ask whether today’s working class (including the trumpers) will ever again be the center of the nation’s work ethic, will ever again bask in the glory days of Rosie the Riveter and the political influence of the AFL/CIO. In the future one wonders where the collective identity of a U.S. citizen will emerge – given the isolating characteristics of working from home and the extensive automation of manufacturing. In the future what cultural characteristic will define a successful individual?

֎ The disappearance of Christianity. Among the major religions of the world,

Christianity is the most spiritual. To be a Christian requires an eagerness to put aside one’s own sense of accomplishment and replace it with enabling success in others. The theological basis is a spiritual relationship – a partnership – with God, Jesus and the human Christian; scripturally called the Trinity. In 2014 Paul Harvey, a conservative talk show host on radio, said “Too many Christians are no longer fishers of men, but the keepers of the aquarium.” – clearly a recognition of an evaporating spiritual element in Christianity.

For many decades religious thinkers have pondered what will replace Christianity. Will it be atheism? Will it be humanism? Will it be naturalism? Will it be, in a computer-driven society, determinism? Will a new age of theocracy emerge? Each of these ideologies has a similar ethical structure, essentially endorsing a grand order from which morality can be deduced but not necessarily from an anthropomorphic deity driven by spirituality. Like the national identity of success, Christianity is a deeply rooted characterization of most U.S. citizens. What will replace the spirituality provided by Christianity? Will church buildings go the way of public telephone booths? What unchanging, overarching principle will guide humanity in the simulated world of artificial intelligence?

֎ Economic theory. Since the beginning, Homo sapiens’ habitat has been one, most of the time, that has allowed a constant increase in the number of humans in the

world. There was always another natural resource to leverage, always a new way to profit as a species, always a new intellectual device to increase production beyond human capability.

Along with a period of unusually long and stable planetary weather, the environment allowed three primary economic theories to work: capitalism, socialism and communism. Granted, there are unending political ways to manage these theories from dictatorships to democracies but only these three economic theories can leverage the natural resources in a manner that is sustainable. The number of humans has long surpassed survivability based on hunting/gathering and family labor.

Today the human population has grown past 7 billion on its way to what many scientists from different disciplines believe, given natural resources, is a maximum capacity of 11 billion. Add to population issues the issue of global warming and a reduced need for labor in an automated world and one begins to wonder what food will be available? What income will be available? How will banking and supply economics work as resources diminish on a person-to-person basis? What is the future of capitalism when there is no longer an opportunity to increase profit? Will underfed socialism lead to an era of war and domination?

Humans may not be wiped out by a meteor like the dinosaurs were, but humans may experience a rapid transition as the combination of profiteering, extreme weather and resource depletion come together to form a new age.