On Friday, Stanford University released a study by internationally prestigious scientists that declared planet Earth is well into the sixth mass extinction (Holocene). The report has charts and other references that indicate the fabric of the planet’s ecosystem is collapsing at an ever increasing rate. The report predicted the collapse would occur in about three human lifetimes (315 years+or-). The report further suggested that humans will be one of the earlier extinctions because of human dependence on so many environmental and specie services, e.g., naturally cleaned water, pollination by bees, and stable weather patterns for vegetation.

The mariner is befuddled that no television outlet grabbed this issue. If the reader hadn’t come across an article on a few websites, the reader would never know that extinction of Homo sapiens has become a statistical reality – near enough that today’s elementary school children will have their lives disrupted in significant if not fatal ways. Despite what the Bible says about Armageddon, it will not occur in one day. It will occur faster and faster over time. For the most part, symptoms will involve starvation, disease, economic collapse, vandalism and true anarchy as governments will not have the resources to quell the collapse of rule by law.

There is a book on this subject published recently by Naomi Klein, This Changes Everything: Capitalism versus the Climate. (The mariner’s town library has a copy as well as a copy of The Sixth Extinction by Elizabeth Kolbert). Klein has written several books on the subject of economic greed destroying the planet. Following is an excerpt from the New York Times book review for This Changes Everything:

“Klein diagnoses impressively what hasn’t worked. No more claptrap about fracked gas as a bridge to renewables. Enough already of the international summit meetings that produce sirocco-quality hot air, and nonbinding agreements that bind us all to more emissions. Klein dismantles the boondoggle that is cap and trade. She skewers grandiose command-and-control schemes to re-engineer the planet’s climate. No point, when a hubristic mind-set has gotten us into this mess, to pile on further hubris. She reserves a special scorn for the partnerships between Big Green organizations and Immense Carbon, peddled as win-win for everyone, but which haven’t slowed emissions. Such partnerships remind us that when the lamb and the lion lie down together, only one of them gets eaten.

In democracies driven by lobbyists, donors and plutocrats, the giant polluters are going to win while the rest of us, in various degrees of passivity and complicity, will watch the planet die. “Any attempt to rise to the climate challenge will be fruitless unless it is understood as part of a much broader battle of worldviews,” Klein writes. “Our economic system and our planetary system are now at war.”

The point is, there is a mountain of resistance to change – especially on capitalist philosophy and the ingrained demand for ever increasing profits. How long will it take Earth’s humans to break the most successful profit engine in history? The Mass Extinction report implies that everything must be corrected in two lifetimes to prevent full collapse of the environment.

The mariner includes one chart from the report that ties the development of the mass extinction, or conversely, the destruction of the global environment, back to the beginning of the industrial age. 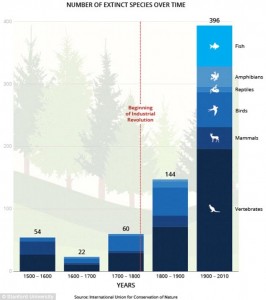 An easy to read article is available at the following link:

As Naomi Klein pointed out (and Pogo), our own perceptions of what is good, better and best for each human, each of all species, and the planet environment itself, is a myth. We do not have a model of human behavior that matches the reality around us – nor will reality accept it. Yet, humans are delinquent and tardy in how they manage their own place on the planet.

How many years will it take for humans to eliminate arrogance and hubris and recognize that we are not the reason for the Earth to exist?

How many years will it take for core cultural values to recognize that Homo sapiens is not, by a high count, the superior species. We are more dependent on many other species than they are on us.

How many years will it take to dismantle capitalism and nationalism? If history serves correctly, once a nation has cured its unstable situation of war and abuse, it won’t be until the third generation thereafter before that nation will have leaders unscarred and unbiased in their decisions about national policy and culture.

The mariner will have more on the Holocene as matters develop. He presents only high level concepts and ideas in this post; he depends on the reader to pursue links and news sources that will add more substance to this issue.