The European Union (EU) is having a more intense disruption with populism, nationalism and a drift toward totalitarianism. We in North America – particularly the US – should pay attention to what’s happening across the pond because the causes of disruption are quite similar.

IMMIGRATION – Donald has heightened the reactions of his base by taking the side of racist politics and exacerbating border issues with his fence initiatives; along with Jeff Sessions (lest we forget Jeff took Strom Thurman’s place as the leader of racist policy in the Senate), has eliminated sympathy, empathy, fairness and every other human instinct from ICE, tearing families apart not only in the Southwest but across the country. Further, Donald is defunding several assistance programs for immigrants, for example, DACA and aid programs for newly arrived legal immigrants. This legislative turmoil is magnified in the EU by confrontation in 28 member nations.

Actually, US citizens statistically are not as upset about global migration as Donald and his followers are. The proportion of immigrants in the US is quite a bit less than the proportions in EU nations; as of 2015 immigrant population in the EU was 19.9 percent of total population (1 of every 5) while the US immigrant population is 14.3 percent (1 in 7). These numbers reflect all immigrants, not just the headline wave in the news. Unlike EU migrations from the Middle East and Africa, US migrations largely are from Central and South America and some from Asia.

Having made this case, it can be seen that Donald did not cause immigration woes; he is the result of a populist condition energized by several circumstances in the US having to do with economic imbalance, technology and cultural transition. Fortunately, the size and democratic philosophy of the US have not permitted totalitarian leaders as in Greece, Turkey and other small nations suffering from the same woes – though Donald wishes it were so.

ECONOMY – The following chart from The Economist magazine shows a relative comparison between the US, EU and other nations for the quality of life for the poorest 10% and the wealthiest 10% in each nation. Note not only the relative quality between nations also note the US has the greatest spread between the poor and wealthy groups. 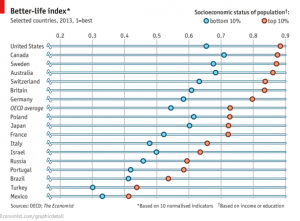 The US does have the widest spread between rich and poor. Further, with middle class income stagnant for forty years and still not climbing today with record profits among the wealthier, it is no surprise that there is a populist reaction in the US. As a philosophical note, the three countries with higher quality for the poor (Canada, Sweden and Australia) have constraints on capitalistic abuse: Sweden has a socialist economy, Canada has socialist policies and, as an entertaining note, Australia keeps capitalism in check with a robust news media!

TECHNOLOGY – While for the moment the US is the leader in several technologies, Europe is no slouch. In fact, the European population is 196,734,765 people larger than the US and is second only to the US in GDP – United States 19,390,600 and EU 17,308,862. The point is, although the US perception is that all countries including the EU are tiny in comparison to ourselves, the EU is a global competitor not only in commerce generally but a competitor in technology and in some ways a leader in responding to the emerging AI global market (witness an EU trade agreement only days ago with Japan, usurping US economic influence (thanks, Donald).

Just as with the United States, EU is struggling with the definition and role of jobs in the future. Although not as thoroughly capitalistic as the US, taxation and industrial strength both are up for reinterpretation in the near future; EU is suffering the emergence of AI as is the US but even more so because of multinational issues among EU member states. An example is the push back on privacy usurpers like Google et al – something the US has not begun to do at Federal levels.

CULTURAL TRANSITION – Many decades ago, perhaps in the late 80’s, Oldsmobile introduced the world to the slogan, “This is not your father’s Oldsmobile.” No one denied it was a different vehicle with newer technology but many opined that the older versions had more power and comfort. Since then the phrase has become an icon for claiming significant changes in familiar objects and circumstances. We can safely say today a variation: “This is not your twentieth century!”

The millennial generation was the pivot generation to new behavioral forces that today continue to erode our 20th century religion, job security, Federal conservatism (AKA Establishment) and class/race relations. Each generation has put more pressure on social change that is long overdue.

Mariner burns leaves in the fall. The approaching age of artificial intelligence, perhaps only one more generation into the future, has an effect on culture change that pouring gasoline has on a leaf pile.

Perhaps by watching the European Union wander into this vortex, we may have a few weeks lead on what will happen on this side of the pond.