Two days from now, Americans have the opportunity to vote. The mariner’s advice up front for every reader in any country that has an opportunity to elect its representatives is to vote.

US citizens do not do this very well and they pay the price. Professional politicians and corporate lobbyists now control the essential concepts that determine democracy; neither is interested in the wellbeing of citizens, democracy, fairness, effective administration, not even the American work ethic. A normal work year contains 260 days for most folks. Congress worked 97 days before the election and will be a lame duck congress for the remaining 15 days.

The House of Representatives is on track to produce the lowest number of legislative proposals since the Clinton administration. During their two-year term, there are a number of House representatives who have not introduced one bill in behalf of their constituency.

US citizens, those few that do vote, are bound to a party rather than to a candidate who possibly may do a better job of repairing federal, state and local government. This causes gridlock because 71% of the general public does not participate in the voting process.

There are other ways to change election processes. For example, 27 states permit direct referendums on ballots without challenge or contradiction. If a referendum passes, the government must abide by the language of the referendum. Many think the referendum is the only way the citizenry can force gerrymandering out of elected officials’ hands and have it run by a neutral agency. The way gerrymandering works now, the ten-year census allows politicians to redefine districts. This doesn’t work, of course, because the majority party draws silly districts that virtually eliminate the opposite party a chance to win in an election. 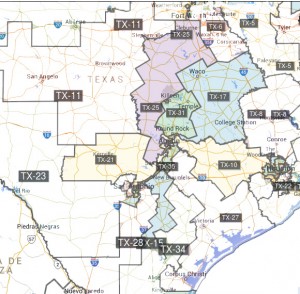 This solution required 35,000 square miles to offset 272 square miles that constitute Austin. There are similar examples in every state – some defy imagination. Gerrymandering is the primary cause of dysfunctional government. Vote for individuals who want districts to represent balanced population sectors without regard for party, color, wealth, or corporate zoning without public vote.

The second damaging cause is that (a) the citizenry has a blasé attitude toward voting (b) states, especially conservative states, have written voting rights laws that prevent people of color, college students, lower class people and others from voting without great difficulty or impossibility.

Something must be done to give the government back to the people. For now, do your level best to vote for the best candidate. Vote November 4.