Given these two statistics, everything seems copacetic. $1 in wages in 1980 equals $3.35 in 2019. Yet today there seems to be economic unrest among the citizens. What these statistics belie is the fact that, adjusted for inflation, salaries are flat while the cost of living has increased dramatically.

One element is housing. The average inflation rate per year from 1980 to 2019 was 2.94%. Housing inflation per year rose by 3.09%. A house that cost $100,000 in 1980 costs $327,118 in 2019. Salaries however did not rise in accordance with housing inflation. Rents increased as rapidly; double and even triple occupancy is a common experience. The chart below covers the years from 1997 to 2013. It is a good pictorial to show the relationship – which continues to this day. 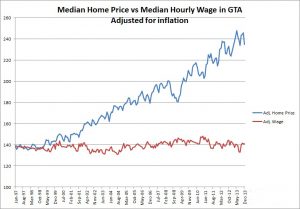 The number of students in kindergarten through the 12th grade who are homeless has increased by 70 percent over the last decade according to new federal data that also suggests it shows no signs of slowing.

Homeless in College: Students sleep in cars and on couches when they have nowhere else to go.

A survey of nearly 86,000 students taken last fall by The Hope Center for College, Community and Justice found that homelessness affected 18% of respondents attending two-year colleges, and 14% of those attending four-year institutions. The number who said they had experienced housing insecurity, such as difficulty paying rent, was much higher, at 60%, among those attending two-year schools, and at 48% for those enrolled in four-year institutions.

The issue is that, given inflation, salaries have not kept up with housing inflation and new construction is static; young adults, whether in college or not, cannot meet the demands of inflated housing costs. Further, affording a home is disappearing for increasing numbers of the middle class. And if that imbalance is not enough, more than 13 million Americans could become climate refugees as sea-level rise comes to pass.

Housing is in a state of crisis. Not just the traditional lack of housing for the poor but a national shortage of affordable places to live because income has not kept up. This is truly critical for cities where there are jobs: the salaries are insufficient to find a place to live near jobs not by a few dollars but by thousands.

Mariner suggests this may be the major political issue for the next decade. It is complex, economically imbalanced and has devastating effects on citizens who otherwise would be living normal, home-centered lives. Given its higher inflation rate, housing has become an important investment. Multiple family housing is fought tooth and nail by the NIMBYs (Not in my backyard). Zoning and lock-down property standards issued by HOAs (Home Owner Associations) make it difficult to solve suburban issues.

As to the turtles, they inherit a permanent home for life.