Many may not know this term. It is the day of the year that humanity requires more of the Earth’s resources than Earth can provide for that year. In 2015 that day fell on August 14. From now until December 31, humanity is borrowing against future years. An example is the use of aquifers – water stored deep in the Earth. We are rapidly draining aquifers dry. What will happen when we have drained all the water? It took hundreds of thousands of years to create aquifers; humanity is draining them dry within 200 years. The chart below shows that earlier each year, humanity consumes more than the Earth can provide: 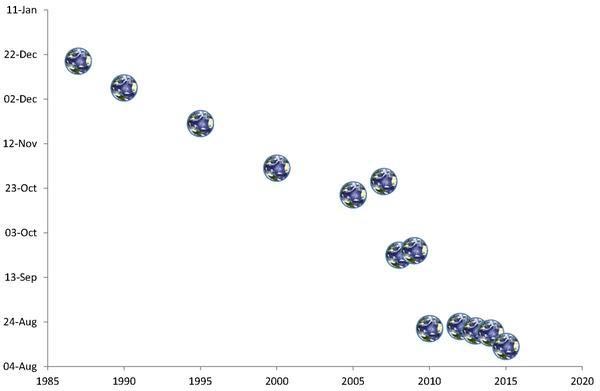 The latest population projection shows that by 2100, 85 years from now, the number of humans will grow from 7 billion+ to 12 billion+. That number is approaching double today’s population. Ecological resources are a global issue. It is larger than one nation, or the many international coalitions. It affects every nation on every continent. Every day the world dickers with economic and military wars, and ignores bellwether changes like global warming and creating dead seas that used to provide large quantities of life, global issues loom closer. Solving global issues will require every nation’s participation and will take decades to accomplish.

On a more imminent topic, the United States and most of the temperate climate nations will be affected by the strongest El Nino since 1950 – the first year records were kept. Southern California likely will get the rain it needs, albeit via heavy storms and flooding; Northern California and the top tiers of states all the way to the great lakes will be drier and warmer through the winter; the Upper Mississippi Valley and the Ohio Valley will have drier weather, perhaps even drought-like. The South, coast to coast, will have much wetter weather again via large storms. A second jet stream will come from Alaska and pass over the Great lakes into New England and the Middle Atlantic states.

The degree to which this strong El Nino will disrupt agriculture or cause flooding is still unknown but NOAA advises “above average” changes to our weather patterns. A tip to how much above average is in the name given by the cable weather channel: Godzilla El Nino. Crudely bilingual but a tip. If one remembers 1997-1998, El Nino produced snowstorms in New England that fell in feet per hour, rainstorms across the South that fell in inches per hour. Iowa and Missouri flip-flopped from very cold to very warm to very cold again.

Many planetary events have heightened profiles. In the mariner’s opinion, global warming is an indirect cause of stronger weather patterns and may, along with a weakening magnetic field, exacerbate plate tectonic activity. Because of the Sun’s cycle, scientists predict a small ice age in mid-century. Times they are a-changing!

Where will we put another 5 billion people? Not on islands or seashores – they will be underwater.