While visiting the Middle Atlantic States a few weeks ago, the mariner visited the Patuxent Research Refuge (PRR) in Laurel, Maryland. The refuge is operated in part by the U.S. Fish and Game Service and by the U.S. Geological Service. PRR, with 12,841 acres, is the largest science and environmental center run by the Department of the Interior. PRR is the only National Wildlife Refuge in the United States established to support wildlife research.

For example, in 1942, only 16 whooping cranes remained in the flock that 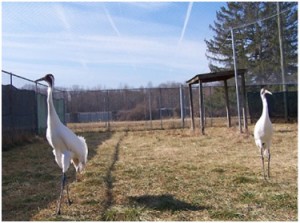 annually migrates from Wood Buffalo National Park in Canada to Aransas National Wildlife Refuge in Texas. An additional six cranes were located in Louisiana, bringing the total global population to just 22 individuals. Unfortunately, the Louisiana flock died out a few years later, so all the whooping cranes now alive derive from the original 16 birds from the Aransas-Wood Buffalo flock. As of October 2013, an estimated 434 whooping cranes exist in the wild – a significant improvement – thanks in part to the captive breeding program at Patuxent.

Mariner was impressed by the quality of the dioramas in the visitor’s center. The many rooms have themes that cover many habitat areas, life-sized wildlife, the importance of food, fresh water, and the many facets of global warming.

Mariner travelled to Annapolis, Maryland where he has sailed many times. When sailing, he particularly enjoyed watching the Naval Academy’s ‘Navy 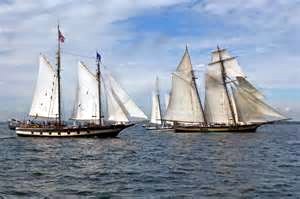 44MKII’ as they left the Academy to sail to all parts of the world. These boats are schooners built with special requirements for the Naval Academy. Annapolis is a wonderful destination for a trip to Maryland and Virginia. The location fits well in a trip to Washington, D.C. The Annapolis State House is famous in Continental history as the US National Capital in 1783-84; the Treaty of Paris ending the Revolutionary War was signed in Annapolis. A visitor must practice driving roundabouts (circles); Annapolis has two connected together for your driving pleasure.

Just a block from the Naval Academy is Saint John’s College. Readers may recall the mariner’s chagrin regarding disbandment of liberal arts studies in many colleges. At St. John’s, however, one enters a bastion of liberal arts education. The following is an excerpt from their website:

Statistics show that St. John’s College students excel in their endeavors both at the college and after graduation. Almost 70 percent of St. John’s graduates pursue advanced degrees—many enter the nation’s leading humanities, science, business, law, and medical programs. St. John’s College is in the top 2 percent of all colleges in the nation for alumni earning PhDs in the humanities, and in the top 4 percent for earning them in science or engineering.

One element of St. John’s curriculum is that every student must read and report on a predetermined list of fifty classic humanities texts.

Mariner took his first sailing lessons in Annapolis. He finished his captain requirements in Florida. On his last sail to the Caribbean with his family, he visited St. Vincent and the Grenadines and an island belonging to Granada. At a small inlet on the west side of St. Vincent is the shooting location for the first Pirates of the Caribbean movie. These islands are far enough south to have local cultures yet to be overrun by tourism. Often, schools (or pods) of dolphins will race with the boat for a mile or so. In the mariner’s opinion, Caribbean weather is much nicer than many places located along 40°38”42.62’ N.

In addition to points of interest, Maryland seafood is outstanding – especially

the blue crab in every possible style. When the mariner and his wife visit family and friends, somehow several meals involve crab. The photograph has two, half-pound crab cakes flavored and cooked to perfection – one entrée from the menu.

Nate Silver, the probability star, maintains all his odds and prognostications from sports to politics on a website called “538.” His political articles are easy to read and show his reasons for his predictions. Nate himself is not very political, which is good; his thought processes have little or no ideological basis – just the numbers. If you are tired of the narrow and sensational news from news channels and pundits, check out Nate Silver at:

http://fivethirtyeight.com/politics/ It is refreshingly apolitical.

Also on 538 is an article about patent rights in big pharma that reads a lot like the manipulations by NRA and the gun manufacturers. Unusual light shed in TPP negotiations bares the conflicts and suggests that the pharmaceutical arrangements in TPP are worth billions in profits and was the last point to reach agreement among the nations. See:

Finally, a new book hot off the presses is a book about the Israel-Palestine conflict that has raged for many decades. The ambassador to the Middle East, Dennis Ross, is the author of Doomed to Succeed: The U.S.-Israel Relationship from Truman to Obama, published in October 2015 by Farrar, Straus and Giroux, LLC. The book isolates the history of the US/Israel relationship based on each President’s relationship with Israel. Mariner suggests reading an excerpt from the book rather than purchasing it. See: