Everyone who follows the reality of our times is aware of the complex priorities surrounding the nurturing of the Earth and its biosphere. The priorities range from global issues like chemical contaminants that destroy the ozone layer and the destructive effects of excessive Carbon on the environment, to more political and philosophical issues like international agreements to slow Carbon discharge and whether the Federal Government has the right to own and manage land in behalf of a balanced biome in the western states of the US. To understand the scope of this issue, the Federal Government owns fifty percent of the land in eleven western states; Federal Government owns over fifty percent of Nevada land – the State where Cliven Bundy took issue with the Federal Government over his “right to use Nevada’s land.”

This last issue, an argument today about the right of a national government to seize and hold land in behalf of a larger objective, provides an unusually clear dialogue about a person’s right to pursue life, liberty and the pursuit of happiness versus global values required to sustain human wellbeing in a global context. Right now, a test case is playing out – regarding the Cliven and Ammon Bundy confrontations with the Federal Government over the right to use Federally preserved property for farming and other private enterprises and, in Ammon’s case, the right of the Federal Government’s justice system to prosecute individuals for abusing “Government property.”

Beside the conflict between private enterprise and Federal control, this case provides a clear picture of the cultural shift in Federal objectives over time. Originally, very large sections of land were acquired by the Federal Government to assure that it would not be divided into disorganized uses that would prevent using the land for its natural resources, primarily lumber and grazing. The original intent, as the west became settled, was to sell off the Federal land in large acreages to private owners who would continue to pursue renewable practices for lumber and grazing. Later, around 1880-1890, there was a fear that private enterprise would strip the western resources of a ready supply of wood – as important then as oil is today – that would lead the nation into a natural resource crisis. As a result of this concern, the Federal Government’s attitude toward a sell-off faded.

In 1947, the Federal Government created The Bureau of Land Management (BLM) – the agency that attempted to seize Cliven Bundy’s cattle in 2014. The BLM is tasked with multiple and different interests, many of which conflict with each other. Objectives managed by the BLM include commodity production, grazing, recreation, ecological functioning, endangered species habitats, and revenue. 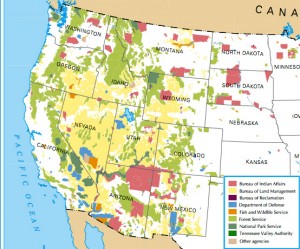 In Cliven Bundy’s case, he refused to honor the rights of the Federal Government as owners of the land where he grazed his cattle and never paid over one million dollars in fees for the right to graze there. Fees began in 1993 when the BLM moved to reduce grazing to protect the endangered Desert Tortoise. When the BLM began removing cattle to be auctioned to pay overdue fees, the situation became an armed standoff as militant groups arrived ready to defend Bundy with weapons if necessary. BLM did not want this kind of escalation so they withdrew. Currently, the BLM plans to move through the Federal Court system. This is a slow process. The Bundy family, including Ammon, who is leading a takeover of a firehouse in Oregon, feels they won in Nevada and plan to expand their resistance as opportunities arise.

The Bundys have turned over a huge rock! The mariner suspects our capitalist-dominant culture is not ready for this much governmental authority. Nevertheless, science and technology are defining a path that leads to catastrophic disruption of Earth’s biome within a comparatively short time.

Who can make unbiased – and enforceable – decisions in this increasingly chaotic situation?

1 thought on “The Western States – Independence versus Federal Management”