This post qualifies as something for the musing category but if the world’s circumstances happened to shift in a different direction, this musing could well be a literal event in the future of human beings.

For the last 40 years, technology, computers, robots, escaping into space, growing variations of totalitarianism, stratified economies, all have controlled the center lanes of our attention – of the way H. sapiens may gain control of the runaway culture that has slowly emerged over millennia.

Reading about recent mosquito diseases and how the most promising solutions come from changing mosquito DNA set the mariner thinking that genetics is the best source to find an effective solution for many of the dilemmas mankind faces. Society is busy trying to retrofit technology to help with these dilemmas when, in fact, paying more attention to genetics may be the better option.

This will be perceived as radical, of course. Let’s learn a bit about how genetics has been an active player in our lives since primates came into existence.

Most of us know that our genome, the map that creates each individual human when they are conceived, controls every thought, motion, reflex, emotion, and appearance, all of our physiology as a creature on this Earth. Even our beliefs, whether we are democrat or republican, a psychopath or a romantic pacifist – all can be blamed on our genome, our DNA.

As the works of Charles Darwin enlightened us 150 years ago, the genome has a partner: evolution. Evolution is the teamwork of finding the best way to survive within a given environment. Readers have hundreds of ready examples: some brown bears became polar bears; some weasels became seals; some notably short people were ancestors of Shaquille O’Neill (7’1”, 305 lbs) but his mom Lucile was 6’ tall at the age of 12. More directly, human ancestors climbed out of trees to walk because the Serengeti suffered an endless drought so long that what used to be forest became grassland with trees few and far between. It became easier to walk from tree to tree. Moving from tree to tree as safely as possible became important to survival so more walking predecessors survived to breed than four-footed predecessors. Did you know during those early times our ancestors could walk and jog all day without stopping while requiring fewer calories than a continental breakfast?

If you are interested in delving further into the details of genetics, visit a good library or the Wikipedia. Now that we’ve had a 5-cent tour about genetics and evolution, here’s the insight:

Bonobos. Yes, Bonobos. Zillions of years ago, long before the drought on the Serengeti, There was no Congo River coursing through the middle of the African continent. Dozens of ape species lived across the continent. Some were large, like the Silverback and Mighty Joe Young; some were small like chimpanzees and Bonobos. Eventually, the simians had to compete for food and, as individuals, began to become territorial and even a bit nasty – growing large fangs for fighting one another. The meanest, toughest male became the leader of the local troop.

The dry years dragged on eliminating many ape species. Only one species survived in the southern plains: Bonobos. Eventually the rain came. It was a lot of rain and formed the Congo River. All the large apes lived above the Congo and the smaller species still had to compete with the large ones. Fighting for food and territory had been bred into the northern species via the evolution partnership with DNA. 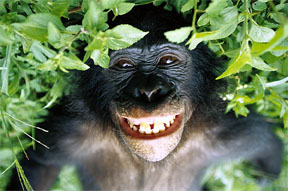 South of the Congo, Bonobos had it pretty easy. Food was plentiful. As it turns out, Bonobos do not have brash egos, territorial attitudes or gang fights. In fact, they don’t fight at all. Bonobos are quiet, even shy. Interestingly, Bonobos have matriarchal troops; the females are political but not inclined to fight. Authority and troop allegiance is maintained by continuous touching, nurturing and protecting. Sharing inadequate food and territory is a non-issue. Consequently, Bonobos have no inbred need to fight; Bonobos have no belligerent personality profile; bonobos have no masculine need to use violence as an expression of sexuality like most other mammals.

So the path to peace is not Roman domination; it is not automation; it is not greed, prejudice, avarice or the other Ten Commandments. These disruptive attitudes can be traced back to the North African apes. No wonder religion is so testy. No wonder corporations are territorial to a fault and lack empathy. Territory, however, is another issue in 2017 – 7,000,000,000 living on a space designed for 1,000,000,000 at most – and projected to be 12,000,000,000 by 2200.

Nevertheless, reproduction can be controlled by the genome as well as belligerence.

The path to peace lies in planned change to the human genome. Find out what genes in us are missing from the Bonobos genome then remove them from the human genes. In a compassionate manner, begin reengineering our genomes to lack belligerence. Pretend we are mosquitoes that carry bad genes and fix them. 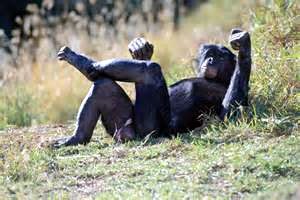 Immediately, pro-aggression types leap forward to claim without aggression, belligerence and domination, humans would not have made scientific progress, etc. The question is does Mr. Bonobo above need a computer?[1] That is a cop out; progress and lack of belligerence are cohabitant.

World peace is at hand.

[1] Do not stop here. We must know more about the Bonobos. They are an endangered species living only in The Democratic Republic of the Congo. They are reduced in number daily by hunting and logging of their habitat. Please read on at http://www.bonobo.org/bonobos/what-is-a-bonobo/