Tim Pitt, City Council member in Knoxville, Iowa, recently wrote an angry article on facebook denouncing the intent of Americans United for Separation of Church and State. The atheist organization was challenging the decision of the City Council to place a memorial art piece in Young’s Park – a government sponsored park – that included a cross similar to the crosses familiar in military cemeteries. 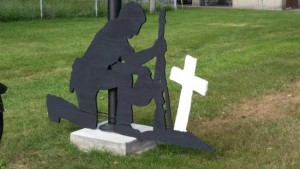 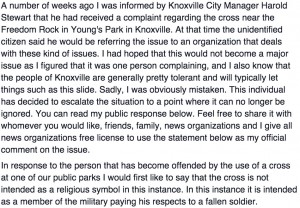 Concilman Pitt continued at length to berate the organization for its disrespect of valid and reverent feelings for fallen soldiers. There is conflict in the atheists’ case because similar crosses are in many government cemetaries around the Country – including Arlington National Cemetary. Clearly, this is headed for the court system – if the courts choose to hear the case.

Broadly speaking, the atheists are a counterpoint to those who would establish a Christian theocracy, primarily religious conservatives fighting similar battles from the opposite side of the issue. Similar conservative events are Chick-Fillet, Hobby Lobby, the clerk in Kentucky who refuses to grant marriage licenses to homosexual couples in spite of high court injunctions against the clerk, the insistance of creation history as valid history in public school books, vocal prayer in schools, etc.

The mariner believes those tangled in symbolic issues like crosses, Stars of David and even secular memorials, are distracted by irrelevant idol worship. Memorials, regardless of their shape, are simply memorials, perhaps suggestive of a legitimate association with religious reverence but certainly not a tool of proselytizing and, as Tim Pitt contends, not representative of a state church.

It is insane to separate church and state with a cataclysmic act like removing crosses from graves or religious icons from past sites of remembrance. Such an act would be comparable to ISIL destroying temples and historical artifacts. The rows and rows of white crosses only speak loudly of a long age of human desecration.

In 1982, a Vietnam Veterans Memorial was built in Washington, D.C. commemorating 58,272 killed in that war. There is no cross, yet the “wall” is one of the most powerful commemorations ever dedicated to soldiers killed in action. When it was built, a mother refused to believe that her son would be remembered among the tens of thousands who died. Her friends traced his name from the wall and took it to her; she clutched the drawing as if it were the American Flag at a military funeral. A simple wall as powerful as 58,272 crosses.

The point is this: The role of religion in society is changing as secular awareness grows in an age of information. There is no blame in this transition nor is there permanence in religious beliefs – else we still would worship the Gods of the Pantheon. The separation of church and state is a Constitutional requirement assuring religious freedom for all – and thereby preventing a “State Church” from existing.

It is not the crosses or Stars of David that are sacrosanct. It is the soldier buried in his time, in the way of his faith. The crosses, Stars of David and non-religious memorials are for us to remember the heavy price we asked them to pay.

1 thought on “Reverence is not Advocacy”