The following information was published in the PLoS ONE journal on February 13, 2013:

Here, we explore differences in brain function in liberals and conservatives by matching publicly-available voter records to 82 subjects who performed a risk-taking task…. Although the risk-taking behavior of Democrats (liberals) and Republicans (conservatives) did not differ, their brain activity did. Democrats showed significantly greater activity in the left insula, while Republicans showed significantly greater activity in the right amygdala….. These results suggest that liberals and conservatives engage different cognitive processes when they think about risk, and the results support recent evidence that conservatives show greater sensitivity to threatening stimuli….. Conversely, liberals had stronger responses to situations of cognitive conflict than conservatives.” 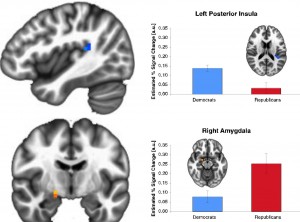 The mariner apologizes for the scientific journal lingo – rather dry reading. He will paraphrase while contemplating what this means in the world of politics and beliefs in general. His comments easily can be interpreted too literally; the reader should consider the mariner’s informal interpretations as parables.

Republicans orient attention to external cues. What this means is Republicans find it less important to understand how they feel inside; more important is their control of potential risk outside.

Now the reader has a clear and firm understanding of the difference between a Republican and a Democrat. The mariner perceives this may not be true. Let’s take a real example but remember that simply saying something for clarity may be overstated and may not be wholly true in the first place.

Republicans are good managers because they are risk averse. Republicans are sensitive to anything that blocks their range of decisions in dealing with risk. Therefore, Republicans do not like labor unions because labor unions have the ability to limit what the Republican may want to do regarding job profiles and salary – risk-laden issues in any business. This does not mean Democrats aren’t good managers, too. Remember the statement in the journal lingo: “Although the risk-taking behavior of Democrats (liberals) and Republicans (conservatives) did not differ….” In other words, a good manager will deal with risk appropriately – liberal or conservative.

The Democrat manager, however, is sensitive to his/her feelings about jobs and salary and, because the temporal-parietal junction is nearby, empathy may play a role in how the risk is perceived. As long as labor unions play by fair rules, the Democrat is more likely to accept why being in a union is important to the employees’ perception of risk.

How are we doing? Maybe one more example. But to keep it simple, no elected government folks are allowed:

Bah, Humbug! People have nothing to do with global warming! Republican or Democrat? We don’t really know for certain but several surveys show that this is a Republican. Global warming is nothing if it is not constrictive, behavioral (the right amygdala doesn’t know about behavioral) and interferes with profit strategies across the board. A Republican would run from the restrictive regulations that cure global warming. The same is true of the fossil fuel industry, the banking industry and a myriad of other corporate interests that do not want to be curtailed in their decision making regarding risk to profit.

What is the future of humanity if it all boils down to Left Posterial Insula versus right amygdala?