֎ The reason Donald wants to get rid of the shelter in place and the six-foot rule in rural counties is because in the November election delegates to the Electoral College are assigned from election districts representing, more or less, one or more counties. Just to make sure everyone understands how the Electoral College works, mariner quotes Wikipedia: 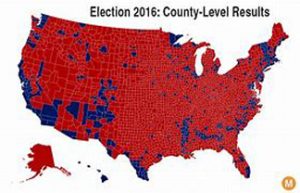 Mariner has written about how thin Donald’s 2016 victory was in a handful of states.[1] Now, with the interruption of the Coronavirus, mariner is concerned that the anticipated groundswell of democratic voters will not occur in November. As the democratic turnout lessens, the more likely the Electoral College will come into play. Red states assured, Donald’s campaign managers have their eye on flipping the same four states: Wisconsin, Michigan, Pennsylvania and Ohio. Less democratic turnout quickly will bring Florida and Iowa into the mix. In 2016, two western states had delegates that did not support the popular vote in their states; this likely may occur again.

֎ The coronavirus has interrupted not only how large the turnout will be but how the electorate will vote. The virus likely will be around through the summer and certainly won’t be gone by November. State election supervisors may have to change the rules for voting, perhaps to mail-in, email, telephone or whatever. Besides the issues of bureaucracy, imagine 50 separate states dealing with security, timeliness, accuracy and gerrymandering. Further, how the electorate votes can dramatically shift the results. For example, recently Montana had several elections within months. The counties complained about cost since the counties had to pay for the elections. The counties suggested a mail-in. The republicans nixed this idea because if everyone voted in Montana, clearly it would be a blue state.

֎ Sadly, the intellectualism and idealism that dominated the democratic campaign for President has been pushed aside by the virus. Still, the twenty-first century remains an unsettled and undefined future. At this time in history, many large events will unfold whether the US and other nations are prepared or not. Like a horse rises from the ground and shakes off the dust, the United States must rise and shake off the dust of the twentieth century. Elect young, smart and humanistic representatives to the entire Republic.