Have you ever been lost? It’s a sense that one has lost touch with the perimeter or edge that provides definition to a person’s situation. One feels adrift and even afraid because there is no meaningful ‘here’ or ‘there;’ there is no ‘over there.’ It is then that we realize how important it is to know where we’ve been, where we’re going, and where we are relative to our start and finish.

This sensation of being lost can be induced in many different situations. For example, trying to solve a puzzle with too many variables like the ones that offer “Jane is 4 years old; John is 12 years old and their brother is 20 years younger than Aunt Joy who is six years younger than their mother. . .” Another example is the experience that college freshmen have when trying to identify one’s proper role in a completely unknown environment. Sometimes the unknowns are so vast and complex, we don’t realize we’re lost!

That brings us to today’s example of being lost. Who is lost? The entire world of people is lost. The world’s cultures are eroding like sand blown by the desert wind. Mariner can provide indicators that suggest we don’t know where we are or where we’re going in the future:

֎ Authoritarian governments are increasing while democratic countries are decreasing. The imbalance has accelerated since the fall of the Berlin Wall. The latest example is China which voted only a day or two ago to grant President Xi Jinping the status of President for Life. Even old standbys like Turkey, Greece, and the Balkan nations are struggling and show signs of increasing authoritarianism. The map shows where authoritarianism has emerged (the orange and yellow states – apologies for the blurred image). 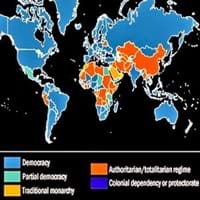 Since the early 1500’s the bluer nations have ruled the world. It is likely that blue rule will fade in the 2000’s. In its third iteration since the 1940’s, China has grown up economically and has improved culturally. It is so huge in national presence that it is likely to dominate world economy and culture much as the United States has since the 1800’s.

Typically, authoritarianism evolves in nations with failed economies or oligarchical cultures. In the case of China, a nation with an average ten percent growth for decades, it will become authoritarian. The question with China is whether one man’s vision will comprehend change well enough to sustain global leadership as the world changes dramatically over the next 50 years. While authoritarian governments can take charge of confusion more quickly than messy democracies, their weakness is the inability to manage cultural change.

֎ If authoritarianism is at one end of the spectrum, the United States (and the less influential Nordic States) is at the other end. Unfortunately, the founding fathers wanted a nation ruled by the people – no monarchy here – but also wanted government to control the economy and the military. Hence, a democratic republic; something like a duckbilled platypus. While touting democracy as the guiding force, the republic side has dominated society and is no better at managing culture than authoritarianism (current studies show that over time the voting public has influenced one percent of legislation while moneyed sources have influenced ninety-nine percent, which explains the growing problem of oligarchy and corporatism in the US since the 1850’s). It is the case with any government philosophy that a hot, expanding economy forgives many sins but the US economy isn’t ‘hot’ anymore.

The US culture has become ragged without good social leadership. As the 1990’s rolled into the 2000’s, fringe conservatism and shifting liberalism crumbled national unity. Further, every country in the world is exposed to lightning-speed changes in culture because of the Internet and Artificial Intelligence. Who knew the morning coffee-klatch would meet on Facebook?

Global economics is changing as well. Old natural resources, old technologies and old political liaisons are up in the air at the moment and do not fit the new world economy in a technology-led world.

֎ Technology has been a puzzle piece for decades. Remember when a generation quietly passed on as it handed the torch to the next generation? Now folks have to live through the next generation as well and maybe the one after that. Never mind that joblessness, financial security, really old parents and feelings of uselessness are left to you to manage. Does that obnoxious voice box in the living room (Alexa or Google Assistant) look like its growing arms and legs? Even today, it knows you’re pregnant before you do; be careful if it starts to rearrange your investments and insurance – it knows when it’s your time to go. If you thought your spouse nags all the time, wait until the voice box follows you around giving you advice about everything and, dangerously, not telling you things you should know. Further, lawyers beware; there are legal bots online that can provide legal services for any need a client may have including the forms to process the issue.

֎ The environment, the puzzle piece still run by the planet whether we acknowledge that or not, already has plans to change the weather, coastlines, atmosphere, food resources and the diversity of nature itself. Did you know that when the last great ice age melted it created the Great Lakes? The water level of the oceans rose 300 feet. Today, if you live on the seashore, a long term mortgage may not be a good idea. You may want to sell soon – just ask folks who live in Bali, Miami or New Orleans.

So – if Jane is 4 years old, China is the new global power, your great-great grandparents live in the basement, you meet for coffee on Facebook, your job is gone or your boss is a nagging robot, giraffes and tigers are gone, the ocean creeps under the door twice each day, where are we going?