Guru speculated about China’s Belt and Road Initiative (in China more often referred to as One Belt One Road or OBOR). Very generally, Belt and Road is China’s plan to be the most powerful economic engine in history. This is not simply bravura but a scale of economic activity necessary to accommodate China’s very large population and its stressed economy. It is a huge goal costing more dollars than anyone can begin to estimate but at the same time creating economic opportunities for about 60 percent of the developed nations in the world today. 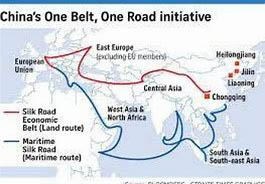 Amos has had it with the US citizen. The harsh combination of identity politics, populism, incompetent, party-zealotist and opportunistic Congressmen, news programming required to make a profit, predator corporations, a horrific, selfish, hoodlum-like Whitehouse, and more, all virtually have eliminated the American ethos. Acknowledging activist interest, albeit it often a part of the list above, common citizens don’t care about ethos as long as they have their Facebook, smartphone, Echo, and Netflix. Putin is right – Americans have irretrievably trashed their respected role among nations. And the beat goes on . . .

Meanwhile, Chicken Little is fearful that he may be deported because his grandmother at age nine arrived in the US as an immigrant.

Mariner agrees with dissenters of Elizabeth Warren’s claim to be a Native American. Mariner’s Aunt Mary married a full-blooded Cherokee and had a son that looked more native than the man on the nickel. But that heritage was never used to differentiate their family. Elizabeth should be ashamed for practicing identity politics.

ELECTION DAY: TUESDAY, NOVEMBER 6. BE THERE AND DO IT – VOTE!