Who needs meditation and therapy?

Try open-brain surgery. Making a person laugh during awake open-brain surgery isn’t as simple as telling a really good joke. Instead, doctors went straight to the source: the brain, according to a report about the operation. To induce laughter, they stimulated a specific area in a long bundle of brain cell tails that run from the front of the brain to the back. The subsequent laughter helped calm the woman for the duration of the surgery.

“Immediately she had profound relief, she was happy, able to communicate and able to make jokes” said senior case report author Dr. Jon Willie, a neurosurgeon at Emory University School of Medicine. Willie was one of the surgeons who operated on the woman.

In fact, when the doctors tried this type of stimulation on two other patients with epilepsy (who had electrodes implanted in the brains for monitoring of their seizures but weren’t undergoing awake open-brain surgery), they found consistent results — stimulating this area of the brain caused a sense of well-being and relieved anxiety, Willie told Live Science.

A new study finds that, over the past 50 years, owning a car has been among the most powerful economic advantages available to U.S. families. While that doesn’t mean everyone should start driving, it does lead the study’s authors to a policy prescription in cities built around the automobile: Treat vehicles like essential infrastructure, and subsidize them for low-income households. “We don’t want to try to balance our carbon emissions and budgets on the backs of the poor,” one researcher tells CityLab’s Laura Bliss. “All of these goals can be achieved if overall we drive less, even if we help some people drive more.” 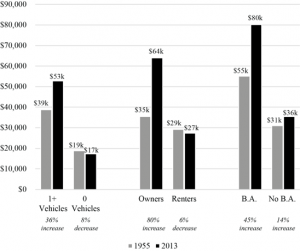 That might not mean private ownership. Electric vehicle-sharing pilots like those seen in Los Angeles are one model. Longstanding efforts by nonprofits to distribute vehicle donations is another. [CityLab]

Getting used to representative government may take time

Mariner wants to jump in on the noise about HR1 (stops gerrymandering), Alexandria Ocasio-Cortez and her fellow new Representatives (should behave like grownups), and the conservative (GOP) efforts to rebrand ‘socialism’ as a curse word.

Mariner described HR1 in a recent post. In mariner’s memory, perhaps all the way back to the ‘60s, no bill has ever spoken as truly to the wants of the American citizenry: stop gerrymandering; stop messing with voter registration; automatically register 18-year-olds on their birthday; expose big money lobbying. Immediately the GOP branded it a grab for Democratic Party power in Congress. Well, yes – if one believes in democracy and equality. . .

It was the McCarthy era in the 40’s and 50’s that had a significant impact on the citizen’s awareness of political philosophy as a threatening deterrent to personal wellbeing. McCarthy successfully turned public opinion against socialism – until then an equal player in party politics. Politicians still have trouble mentioning the word – but not the new bunch.

In 1905 it was the Socialist party that pushed through Congress the idea of an 8-hour day and a forty-hour work week and opened the opportunity for union representation; Charlotte Perkins Gilman was a prominent American feminist and socialist who fought for the equality of women and advocated equal pay and financial competitiveness for women in a time when the women could not even vote.

During Joe McCarthy’s Red Scare of the 1950s, Harry Truman had stirred conservative outrage by arguing that the government had the authority to impose anti-lynching laws on the states and by proposing a national healthcare plan. But what really bugged the Republicans was that Truman, who had been expected to lose in 1948, had not just won the election but restored Democratic control of Congress. To counter this ominous electoral trend, conservative Republicans, led by Ohio Senator Robert Taft, announced in 1950 that their campaign slogan in that year’s Congressional elections would be “Liberty Against Socialism.” They then produced an addendum to their national platform, much of which was devoted to a McCarthyite rant charging that Truman’s Fair Deal “is dictated by a small but powerful group of persons who believe in socialism.”

From that point on in American history the historical contribution of socialist ideas like universal health and other human rights issues were erased from political consciousness.

Mariner is more comfortable with a house metaphor that describes political specialties; the specialties are political philosophies like democracy, equality, socialism, capitalism, even communism and monarchy. The point is none of them work well without a mix of all of them. The house metaphor:

One doesn’t use living room furniture in the kitchen; one doesn’t have Thanksgiving Dinner in the bathroom; one doesn’t put a basketball court in the bedroom, etc. Capitalism has its place but should not have all the power in government; socialism is needed to ensure equality among the unrepresented; even monarchy has a role(remember John Kennedy – the Royal Family?) And further, even Christianity should not be the only ethical view.