Mariner submitted a post yesterday warning of a political tendency toward authoritarianism saying that it was a prominent movement in local jurisdictions across the nation. In this morning’s mail Nate Silver at 538.com wrote the following:

“Republican state legislators spend the early days of this year’s legislative session proposing laws that would make it harder to vote — especially in ways disproportionately used by Democrats and voters of color — under the pretense of preventing large-scale voter fraud (which doesn’t exist).

According to the Brennan Center for Justice, a pro-voting-rights advocacy group, more than 165 bills restricting voting access have been proposed in 33 state legislatures — more than four times as many as had been proposed in February 2020.”

The founding fathers left voting procedures to the states likely because of poor communication in those days. That decision, however, has led to disproportional representation in the Senate, the Electoral College and biased practices in gerrymandering. Whichever party controls the state legislature, controls voting. In Georgia there is a bill that would allow the legislature to overturn an election because it didn’t like the outcome.

What makes this movement important to watch is that polls all along have shown that 40 percent of republicans favor Donald and authoritarian practices that discourage democracy. In the last Presidential election 70 million citizens voted for Donald. At 40 percent, that’s 28 million votes against democracy already on record.

Nationally, the United States is democratic. At the State level, 22 states are consistently red states versus 14 blue states; the rest are close to even but unpredictable. At the county level, well, the reader saw the county results in the last post. 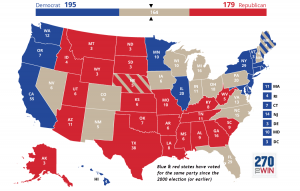 The point is this: Benjamin Franklin’s comment that the US will be a democracy only as long as we can keep it has come to a critical point. Around the world democracies are falling like flies to authoritarian governments. This century has begun an era of hardship that has tossed stable governments in the air like confetti.

The next holocaust will include blacks, Hispanics and Asians as well as Jews.