The Middle East has been a caldron of violence for four generations. This seems a long time for continuous war and political unrest. At the end of the twentieth century and into the twenty-first, wars have been growing larger and any thought of conscientiousness is destroyed immediately and replaced with violence.

There is a new player on the battlefield. It is the Islamic State of Iraq and ash Sham (ISIS). It is predominantly Sunni. Unlike its parent organization, Al Qaida, ISIS is an organized army capable of taking ground and holding it. This capability enables ISIS to call itself a leader of all Islam nations. Whether this is true or not remains to be seen. In recent days, the fighters of the Islamic State in Iraq and the Levant (ISIL) proclaimed there was no longer a Syria or an Iraq. Instead, they said, the territory controlled by the ISIL in those countries was the Islamic State.

Trolling through history books (yes, the mariner has books) and searching the Internet, two ideas are repeated that reach beyond the battleground news on television. The boundaries of the nations in the Middle East were drawn in 1916 by two negotiators, one from England and one from France. Their names are Sir Mark Sykes and François-Georges Picot. The British and French controlled all of the Middle East at the time. The map was literally a divvy-up of resources based on the amount of local control held by the two countries. Whether Shia or Sunni, Turk or Jew did not matter. The boundaries were simply divided like properties on a Monopoly board. A map is provided: 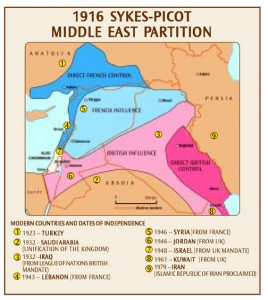 The second idea is that Islam has yet to integrate several sects that comprise the Muslim religion. The Holy Roman Church achieved unification for Christians in the days when Popes could dictate international policy. Has everyone seen any movie about Henry VIII? Those times were bloody, too. Then there was the Protestant Reformation but that was associated more with changes in the rights of individuals to pursue new industries – a plight facing China at the moment. China needs an ‘Adam Smith’ to identify entrepreneurial policy. However, the mariner drifts from the subject.

The point is that any semblance of nationality in the Middle East is based on a dominant Muslim sect. All the nations except maybe Turkey are theocracies. There is no Pope for Islam so ISIS is filling the position.

There are many scholars around the world who think ISIS is too weak and too violent (only by modern standards of decency; all religious wars are violent). Nevertheless, ISIS may provoke unification. No doubt oil in the region is a reason to negotiate some kind of religious agreement – if only an agreement to be different.

All this being said, the common man thinks the Middle East is a bunch of fighting dogs and the world should ignore the Middle East until it straightens itself out and moves from the eighth century to the twenty-first century. For Obama and the west, the Middle East is like a fire that may grow too big to contain. Nor can one forget the oil…..