The legacy of the U.S.’s Cold War-era atomic testing program is still affecting the Marshall Islands at the Runit Dome, which holds more than 3.1 million cubic feet of U.S.-produced radioactive soil and debris, as well as lethal amounts of plutonium. An investigation between the Los Angeles Times and Columbia University’s Graduate School of Journalism reports that the dome is now at significant risk of collapsing from the effects of climate change. American officials have declined to help address the problem, but the news report says the U.S. government withheld important information about the contents of Runit and its weapons testing program, including the fact that 130 tons of soil from atomic testing grounds was shipped from Nevada to the Marshall Islands in 1958. [Los Angeles Times]

There is enough radiation in the Runit Dome to end all life in a large area of the Pacific Ocean around the Marshall Islands and beyond. This catastrophe raises a general issue about island nations threatened by global warming: Carteret Islands, Kiribati Islands, The Maldives, Seychelles, Torres Strait Islands, Tegua, Solomon Islands, Tuvalu, Micronesia and Palau. The problem with these islands isn’t radiation, its people. 1,241,560 of them.

Although not an island, Bangladesh, located in South Asia, experiences floods that cover about a quarter of the country every year. Climate change is making the floods worse for 156 million people. 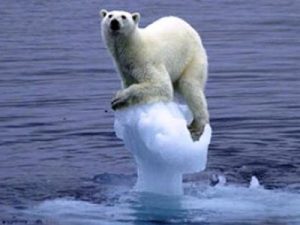