A new study from the U.S. Centers for Medicare and Medicaid Services found a small one percent decrease in American retail drug prices in 2018 — the first decline in more than 40 years — but a significant jump in the cost per person for private health insurance. The study, which was published in the journal Health Affairs, says that last year health care spending overall grew by 4.6 percent to a total of $3.6 trillion, or an average of $11,172 per person. If citizens felt like they were spending more on out-of-pocket fees such as insurance deductibles and co-payments in 2018, those also increased last year by 2.8 percent, they were.

As a marker, US inflation grew by 1.8 percent in the twelve months ending in October 2019.

As suggested above, health care cost grew by 4.6 percent; additional cost per person for individuals grew at 2.8 percent.

Housing and rents grew by 2.39 percent.

Note that the inflation rate of the above three items, representing many more similar conditions in other sectors, are all higher than the overall inflation rate of 1.8 percent. This relationship means that key ingredients in the life of a US citizen are becoming more expensive faster than the US average overall.

On the other hand the New York Stock Exchange DOW grew by 20.25 percent.

In a phrase, the rich are still getting richer and the rest of the citizens are still getting poorer. The crisis is not being mitigated in any way by the federal government. Donald has exacerbated the impact by cutting back government services that help those in need. Mariner is critical that news outlets only show the low unemployment figure. In fact, the ratio between having a job and having fair wages to go with it is widening in a negative direction even while family living rises faster than inflation.

Historically speaking, these statistical relationships are moving rapidly. The ‘middle class bubble’, already broken by Donald’s rust belt base in the last election, faces another adjustment, likely more severe as housing, food, insurance, health services and lifestyle participation rise too quickly for the average citizen to keep up. It is the state of these inflation relationships that lead many economists to predict a serious recession in the near future.

These circumstances are not folly. Europe is ahead of the US by a few years. The result is Brexit, French populism, Spanish succession, and Mediterranean conflicts all the way to Turkey.

In South America, where governments are weaker and in several nations, dictatorships, it is no longer a recession, it is a collapse of an entire economy.

Take note: the 2020 election is a serious election that may set the future much better or much worse. It is more than Donald; it is taxes; it is guaranteed health services; it may even be a government stipend to every citizen to stem the increasing disparity; it is tax reform not unlike FDR invoked.

And there isn’t much time. Several economic thinkers set the crisis year around 2030.

[DAILY KOS] We’ve got a message outside her Des Moines office today to make sure Iowans know that by “changes” Ernst means huge cuts to earned benefits! 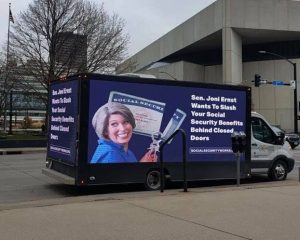 Sen. @joniernst (R-IA) says that “A lot of changes need to be made” to Social Security “behind closed doors.”

Get rid of Reaganomics, turn the Senate Democratic.