We humans have become increasingly aware that we live in an environment not as a dominating owner but simply as just another renter who tends to trash the apartment. Perhaps it’s the global warming issue that helps with human awareness; perhaps it’s the growing scarcity of food resources for the planet; perhaps it’s the cost to farmers when they plow the soil which strips the fields of all nutrients and plants, especially in regions where there are strong winds that carry away the soil farmers just tilled and fertilized and put weed killer down – producing poor yield in the fall.

Evidence of growing awareness is all about. TV broadcasts about gardening, farming, waste management, and collaborative sharing with the environment are frequent. Extension agencies, libraries and garden clubs sponsor programs about collaborative gardening. Mariner has a relative whose hobby is planting colorful plants around the base of trees along New York streets; mariner has a friend who has decided to let violets stay in the lawn. And mariner himself is tinkering with a number of collaborative projects in his own garden.
֎ One example is the cursed Creeping Charlie, a very rapidly spreading weed that

defies elimination. It still is a killing pest in the lawns but in some garden beds mariner has decided to experiment with Creeping Charlie as the ground cover to keep other weeds out and at the same time add to the décor of the garden. It turns out that Charlie has taken hold of his new job with relish. Not even the dreaded crabgrass can sprout beneath a robust covering of Creeping Charlie. In fact, mariner is saving money because he doesn’t have to buy mulch for those areas.

֎ Another experiment is mariner’s tolerance of a rambunctious mole. He must protect against the mole’s burrowing in vegetable beds where seedlings are emerging but 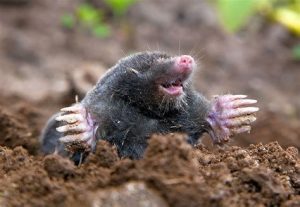 otherwise he has let the mole venture about. Tolerance by the mariner is an experiment to see how many Japanese beetle grubs can be eaten; mariner has many fruit and ornamental trees on a property surrounded on all sides by large concrete pads and accompanying large garages. All beetles come to mariner’s garden.

An unexpected reward is the mole gradually aerates the lawn. Typically, a lawn keeper occasionally will need to rent an aerating device to pull plugs from the lawn so it can grow and accept water. Mariner keeps his lawn a bit high (another anti-weed collaboration rather than performing the typical buzz cut) so the lumps from the mole burrowing aren’t noticeable.

Mariner has mentioned in past posts that his town has lawn Nazis. It is of a different spirit, certainly not one of collaboration with nature but comparatively speaking takes more time, labor and cash to maintain. This difference between collaboration with and dominance of nature has existed throughout history from the first scraping of the ground to cast wheat seeds to the large open mining pits and deliberate elimination of forests today.

In just a few years many farmers have proven that any way to collaborate with the environment is more productive, less expensive, saves waste and is good for surrounding atmosphere, water and wildlife. One common practice by farmers that has been implemented for many decades is a natural easement by creeks and rivers rather than plowing closer to the water’s edge.[1] It is entertaining to work with nature as a partner – both existentially and philosophically. What projects does the reader have?

[1] An excellent documentary on collaborative farming, ‘Kiss the Ground’, is available on Netflix but the reader must search ‘The Littlest Farm’ – the title is in error. The Littlest Farm also is an excellent film about how a family uses nature to transform virtual wasteland into a productive farm but mariner could find it only as a rental or purchase. 3 minute trailers are available online for both films.