֎ The Iowa spring has been slow to start; the ground is still too cold for most vegetables. It rains three days out of five and the daytime temperature refuses to stay as high as the 60s. Iowa has had so much rain that mariner has a foot of 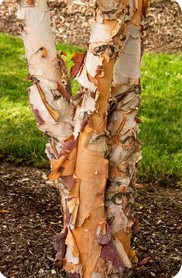 standing water at the back of the property; shrubs and decorative trees just can’t survive. This has happened frequently so mariner has decided to take Mother Nature’s advice and plant River Birch (Betula nigra). This tree thrives in swampy ground found in low spots, especially near ponds and rivers. What is fascinating is the tree’s habit of shredding bark every year (see picture). Insects have a hard time burrowing into smooth bark. Also, as bark peels off, it gets rid of moss and lichen that thrive in the same damp environments as birch trees.

The last few days of garden work have been a respite from the state of the world. However, mariner is aware that he lives in a pleasant spot as climate change begins intensive intrusion in many spots of the planet.

֎ Politico reports on the precarious state of India saying we should be grateful we’re not in South Asia, where in India and Pakistan temperatures have soared above 120 degrees, creating hell on earth. It’s difficult to survive in those conditions without air conditioning, which around 85 percent of Indian households lack. There is also the issue of 70 percent of India’s electricity coming from coal, creating especially negative climate feedback loops.

And there’s worse to come via a “devastating impact on crops, including wheat and various fruits and vegetables. In India, the yield from wheat crops has dropped by up to 50 percent,” reports Hannah Ellis-Petersen from Delhi.

֎ And there’s the checkpoint of the demise of Roe v Wade. Chicken Little has been put on CPAP since he learned that the United States democracy is ranked 26th in the world and falling. Mariner will forego lamentations about the dysfunction of the nation’s governments; it’s too nice a day.

֎ Mariner has noticed an increased rate of death among show business greats. He wanders YouTube looking for clips just to commemorate the passing of an entertainment era. He ponders when the same time in history will apply to politicians.

֎ Finally, this summer is a checkpoint within mariner’s family relationships as many members travel hither and yon for reunions, holiday celebrations and visiting lifetime friends. Buy airline stock!

Be well, readers. Find pockets of comfort and security in a transitive, turbulent planet.