Remember the old days, the really old days when the Sunday paper was a heavy, three-inch edition with pages and pages of funnies, all the news to be had and life sections that were novella length? Mariner’s family would sit around the kitchen table and spend hours consuming the Sunday edition. Well, that tradition hasn’t disappeared in mariner’s family but the Sunday edition is gone.

The 3-inch tome has been replaced by social media, by emails from news agencies, by magazines, by online websites for comics, recipes, by electronic versions of Dear Abby and the latest Hollywood gossip. Mariner’s kitchen table is littered with computers, print-outs and magazines.

The biggest difference is the introduction of fake news and irresponsible commentary. Now, anyone with Internet access can be a publisher without the discipline to affirm facts and to represent society’s perspective.

This memory of olden days was raised by a 3-inch stack of news from today’s multitude of sources.

“Technology can play an important role in the global effort to combat the COVID-19 pandemic; however, this does not give governments carte blanche to expand digital surveillance. The recent past has shown governments are reluctant to relinquish temporary surveillance powers. We must not sleepwalk into a permanently expanded surveillance state now.”

Also, from The New Statesman:

Even so, Xi Jinping’s regime looks to have benefited from the 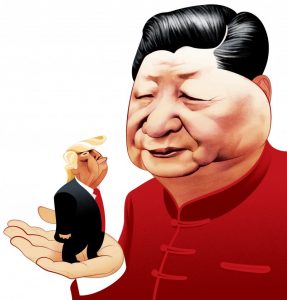 pandemic. The virus has provided a rationale for expanding the surveillance state and introducing even stronger political control. Instead of wasting the crisis, Xi is using it to expand the country’s influence. China is inserting itself in place of the EU by assisting distressed national governments, such as Italy. Many of the masks and testing kits it has supplied have proved to be faulty, but the fact seems not to have dented Beijing’s propaganda campaign.

֎ New data provided to Axios spells out just how outsized a role immigrants play in the high- and low-skilled ends of the economy to keep Americans alive and fed during the coronavirus crisis, Axios’ Stef Kight writes.

Immigrants make up an estimated 17% of the overall U.S. workforce. But an analysis by New American Economy shows they’re more than one in four doctors, nearly half of the nation’s taxi drivers and chauffeurs and a clear majority of farm workers.

Reporting to work in hospitals, restaurant kitchens, cabs or the fields — for jobs deemed “essential” by the government — many documented and undocumented workers are putting themselves at higher risk of COVID-19.

֎ From Politico’s Huddle, one of mariner’s arguments for aged-based term limits:

Congress’ struggle to get tech savvy has frustrated some members. “Leadership from both parties has been very resistant to the use of technology,” said freshman Rep. Katie Porter (D-Calif.). “We have to do better than this.” And other lawmakers have been annoyed by the challenges of going digital. After technical difficulties on a GOP conference call with reporters yesterday, Rep. Patrick McHenry (R-N.C.) sarcastically chimed in: “Love conference calls. Let’s do more of them.” [The dispatch from Heather, Sarah and your Huddle host.]

֎ And back to the New Statesman:

Unlike the British program, Trump’s $2trn stimulus plan is mostly another corporate bailout. Yet if polls are to be believed increasing numbers of Americans approve of his handling of the epidemic. What if Trump emerges from this catastrophe with the support of an American majority?

Whether or not he retains his hold on power, the US’s position in the world has changed irreversibly. What is fast unravelling is not only the hyperglobalization of recent decades but the global order set in place at the end of the Second World War. Puncturing an imaginary equilibrium, the virus has hastened a process of disintegration that has been under way for many years.

֎ As to the comics section, mariner offers a note from Non Sequitur:

Two silk worms had a race. They ended up in a tie.