The mariner first arrived in Iowa in 1964. He had never seen black soil before driving through Illinois, crossing the Mississippi River into Iowa. The first night was spent in Fort Madison, a small city on the river. The next morning, the mariner walked out of the hotel into a scene from a horror movie. The Mayflies had hatched. The air was so full of billions of Mayflies that the Sun was not as bright as it should be.

Mayflies filled the streets level with the sidewalk; shop owners were using coal shovels to clear the sidewalks; they crunched under foot and passing automobiles had a strange sound as the tires crushed the Mayflies. There was no way to avoid the flies tangled in his hair or slipping inside the shirt collar. The Mayflies were in his ears and eyes. 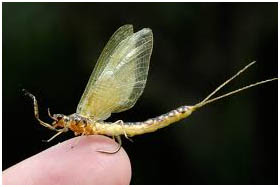 Fortunately, Mayflies are harmless and rise from the river one day a year to mate. In 24 hours they are dead and cover every inch of Fort Madison’s riverfront community. The mariner had never seen Mayflies before, either.

The mariner left Fort Madison to travel to his destination. It is a small town, perhaps 1,000 – 1,200 residents at the time. The very first thing the mariner noticed was the lawns. Every lawn mowed and trimmed all through the town. So obvious was the characteristic that the image remains embedded in the mariner’s memory. Even today, in 2013, homeowners never shirk the duty of cutting the lawn. In the Spring, this means cutting the grass every third day – or fourth, depending on the frequent rainfall. The mariner had never seen such uniformity of lawns. He pondered what this meant about the Iowans who live in this town.

Main Street clearly identified that the town was supported by farming. On Main Street were two farm implement dealers, a Ford dealer, a bank, two restaurants, a hardware store, two grocery stores, a furniture store, four gas stations, a dry goods store, a pharmacy, two barbershops and one church. Farmers came to town on Saturday night, which provided a holiday-like atmosphere. A commuter train ran right through the middle of town. Off Main Street were a mill, three churches, a Chevrolet dealership, another implement dealer, a funeral home, a small motel, a blacksmith shop, an ice cream stand, and a school building that housed all twelve grades.

Clearly, the fifties and sixties were halcyon years. A lot has changed. Today on Main Street there is no implement dealer, no Ford dealer, a different bank, no restaurant except sometimes at the golf course, no hardware store, no grocery store, no furniture store, two gas stations, no dry goods store, no pharmacy, one barbershop, no church, and the train tracks disappeared long ago. Off Main Street, the mill is there, the three churches, a different funeral home, no ice cream stand, no blacksmith, the same small motel that has not changed in over sixty years, and no school.

The majority of townspeople were related through seven major families; everyone truly knew everyone – for multiple generations.

In 1964, the residents were a mix of tradesmen, retired farmers and folks who worked in nearby towns like Fort Madison. Back then, there were few rental homes. Today, absentee ownership is a growing concern. The tone of the town no longer carries an agricultural air; it is a bedroom town, which, if it had a different history, would be called a development. Most residents today have no relationship with farming and while most folks know some folks, no folks know everyone.

The same story is told of hundreds of towns in the Corn Belt. What caused this change? To make a long sociological story short, some major causes are listed below.

Underpriced land in the seventies prompted many farmers to go into debt. Then a few bad crop years forced selloff. This resulted in fewer but larger farms – and fewer farmers who came to town.

Walmart, HyVee and other “box” stores drove the price below what the small town dealers could afford.

The eighties ushered in the giant farm. Where there once were six or eight farm families, now there was only one.

Improved roads made it easy to go to Fort Madison or two other small cities twenty miles away.

The school was moved out of town. Now there was no childhood allegiance to the town by townsfolk or farmers.

It isn’t over. The churches languish trying to hold on to the old culture and have steadily dropping membership. The Golf Club struggles in a similar fashion. Since the new highway was built around the town, not even truck traffic passes through anymore.

What still remains, almost magically, is the small town culture. It is a culture that is laid back, easy going, and friendly. We townies still cut our grass regularly and do not mind stopping to share a few words. It is a leg up on city life for sure. The mariner would like to move this town to an oceanfront location.

2 thoughts on “An Iowa Town”