֎ Misinformation is the weapon of the future, Senator Mark Warner believes:

“I sometimes worry that maybe we’re fighting the last century’s wars when conflict in the 21st century is going to be a lot more around cyber misinformation and disinformation, where your dollar can go a long way.”

Managing screen time, access to devices, kids’ online personas — it’s complicated, and not getting any easier. (Did you see Britney Spears’ son promising dirt on his mom’s career in exchange for more Instagram followers? A thoroughly 2020 story.)

There’s been legislation designed to protect children online, but by 13 kids are mostly treated like adults. But Senators Ed Markey and Richard Blumenthal want to bring new protections to anyone under 16:

The Senators’ Kids Internet Design and Safety Act argues that the internet “is largely designed in non-transparent ways to ensure children interact with content that reflect the interests and goals of content creators, platforms, and marketers.”

The bill, first introduced nearly a year ago, wants kid-focused services to do away with auto-playing video, influencer marketing, or any dark pattern design that keeps them engaged.

If the KIDS Act passed, it would force every platform with children on it — YouTube, Snapchat, TikTok, and so many others — to fundamentally change how they deal with young users. [By David Pierce, Protocol]

֎ The cost of higher education is ballooning. From 1978 to 2017, the Consumer Price Index grew fourfold, but the price of college increased 14-fold, according to research by Ana Hernández Kent, a policy analyst at the St. Louis Fed.

֎ Regular readers may remember mariner suggesting that job loss in the AI era may force individuals into self-managed work. According to the US Census Bureau, Americans are more entrepreneurial than ever before. There were 3.4 million applications to start businesses last year, a record number.

If the reader doesn’t subscribe to the New Yorker Magazine, mariner provides the cover of the latest issue: 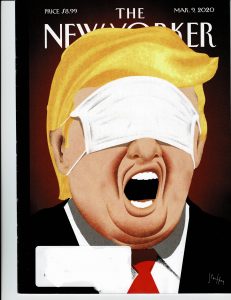