Who among us remembers this song when it was popular? Les Paul and Mary Ford made a hit of it and the Beatles covered it in their era.[1]

We on Earth, for the most part, pay little attention to the Moon except as an ornament in the sky. Many are educated in a general way about the Moon’s role in the creation of the Earth – an unimaginable clash of two giant spheres colliding head-on thereby creating an Earth-sized piece and a Moon-sized piece; The Moon ended in orbit around the Earth and set the Earth on an angle that created Earth’s seasons and continues to affect tides not only in water but in Earth itself.

Here is an intriguing update on Moon stuff: The Moon is drifting away from Earth each year by the same distance as our fingernails grow in a year, about 2½ inches. Balanced in a strange pirouette (both spin), the two bodies are held in place by gravity and pulled apart by centrifugal force. Evidently but very slowly, centrifugal force is stronger and eventually will pull the Moon out of its Earth orbit. What will happen next is not agreed upon by astronomers and astrophysicists. Will the Moon simply fly away into space, leaving the Earth an unrestrained pirouette wobbling uncontrollably around the Sun? At some distance will the Moon find neutrality and settle into a new orbit? As the Moon lessens the balance held today, will polar wobbling on Earth become an issue? Stay tuned.

When mariner was a young rebellious teenager, his favorite comic book was Mad Magazine. Mad is a disrespectful, ill mannered publication that holds no restraints with its tasteless satire and mockery. Fortunately, Mad is still around[2]; there are times when only Mad’s commentary is equal to reality. In honor of Mad, here is the latest cover: 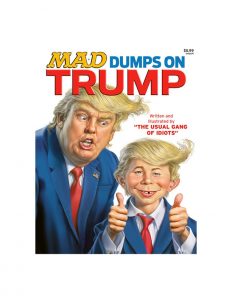 Mariner hasn’t taken a tour of his Internet/magazine reading list for awhile. Every so often he offers a list of websites that constitute a decent review of most of the subjects that fill our lives. Here forthwith:

http://www.politico.com/  …….everything newsy and active in politics

http://fivethirtyeight.com/  …….a statistical look at many subjects by the numbers

http://www.pbs.org/  …….At the website one feels they are in a library. True! Pick your subject

http://www.economist.com/ and the paper edition…….best common sense reading about the state of economics

Science, Technology and the Future

http://www.nature.com/news/  and the paper edition…….serious articles about new positions taken on any scientific subject

https://www.scientificamerican.com/  and the paper edition…….many articles about science frontiers and how they affect humanity

Literature and the Arts

http://www.aldaily.com/  (Arts and Letters Daily) source of URLs to numerous artists and other literary news

https://www.wikipedia.org/ …….can’t be beat for detailed review of language, arts, music, writing, philosophy and their histories

http://www.webmd.com/news/default.htm ……. catch some news and use their libraries to check on your symptoms

https://www.wikipedia.org/ the best, most comprehensive data source on the Internet

http://politicalhumor.about.com/od/politicalcartoons/ig/Political-Cartoons/Debate-Gotcha-Question.htm#step-heading …….even in these troubled times, a visit is comforting

Mariner recommends making a quick stop at the list every week or so or when you have an interest in a specific issue.