Well, so much for a racing start out of Iowa. Democratic candidates look more like campers looking for blueberries than running robust campaigns.

In previous posts, mariner proposed Biden based on his popularity in polls in the key swing states, one of which is Wisconsin. The whole presidential campaign boils down to four or five states and which democratic candidate can have the most influence in those states for the general election.

The next two paragraphs are from the Madison Magazine:

Mark Graul, a GOP strategist who was George Bush’s state director in Wisconsin for the 2004 campaign, sums it up: “If Trump can’t win Wisconsin, he can’t be president. That’s what’s different this time.”

So keep an eye on polls in Wisconsin, Pennsylvania, Michigan and Florida – especially Wisconsin. An excellent website for anything poll is Nate Silvers’ website at fivethirtyeight.com.

As to Donald’s popular vote, virtually all pundits believe he again will lose the popular vote. This assumption is based on polls indicating that Donald hasn’t expanded his base, remaining close to 42 percent his entire presidency. Nevertheless, Donald is an aggressive snake oil salesman; polls in the last two weeks show him creeping close to 50 percent. Iowa didn’t help and the Senate vote frees Donald like a dog without a leash.

The big TV news outlets will milk viewer’s anxiety for all its worth. On the following chart are the viewer comparisons in millions of readers for 2019. To track Donald’s success, an indirect statistic will be Fox’s popularity in 2020. 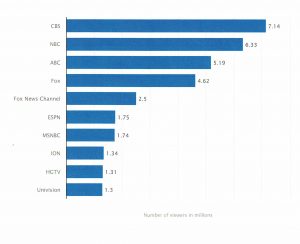 Mariner does not view political news on TV except for a morning briefing from NEWSY, available on cable, ROKU, etc. Mariner explores more civil and accurate websites for the ‘real’ news without suffering angst. He recommends the same for the reader. Track the four swing states including Wisconsin. Track Donald’s popularity at fivethirtyeight.com. This approach should keep the reader sane as well as knowledgeable.

2 thoughts on “Whoever wins Wisconsin wins the Presidency”