It is wise to listen, not to me but to the Word, and to confess that all things are one.

Alas, Heraclitus was not a theist for he also said:

This Universe, which is the same for all, has not been made by any god or man, but it always has been, is, and will be an ever-living fire, kindling itself by regular measures and going out by 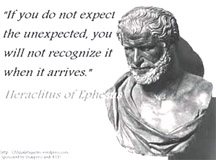 Heraclitus, who lived from 535-475 BC in Ephesus Iona (Turkey), predates Socrates and Plato by a century and was not part of the mainline Greek philosophical revolution although he was commonly quoted by many later Greek thinkers and shows up as a quote in books about other philosophers.

Heraclitus appeals to the mariner because he established the principle that the law of the Universe is the only law and all things that exist in the Universe must obey the same law. Too often the creative genius of H. sapiens is attributed to itself when in the broader view it is, as Heraclitus suggested, a child playing with blocks.

It is difficult for humans to associate with the Universe. The Universe has no recognizable goals. The Universe does not show responsiveness, preference, appreciation, personality, possessiveness, vengeance, favoritism, or kindness. There is only astronomical stuff, chemical stuff, unending space and two unending energy resources: time and gravity – immeasurable time, pervasive gravity and all the space the Universe needs. These eternally present things are called Universe stuff. It isn’t easy to talk with the Universe over a breakfast muffin and coffee; trying to get the Universe’s attention by discovering how to fly to the stars with the Universe’s own stuff doesn’t score, either – less than a spit in the Milky Way.

Before we begin dissecting how humans fit into Earth’s stuff, it will be easier to have a consolidating word for all Earth’s detailed activity, cause and effect, and interactions between elements of Earth’s environment: let’s call it all “stuff.” Specialized stuff. For example, anything created, altered or thought about by humans is “human stuff;” things like orbit changes, volcanoes, earthquakes, geologic ages, atmospheres and magnetic fields are “Earth stuff.” There’s also environmental stuff that includes weather, living things, gold, diamonds, sulfur, critical stuff like water, oxygen and other stuff as may be required.

From a few miles in space, human stuff right now looks very much like a colony of disturbed ants long resident under a large rock. Like the ants, humans are racing about blindly, trying to conjure what is going on; what shall we do? Experiencing reality like an ant but on a human scale, consider the following:

Environment stuff is increasingly unstable – some unstable because of human stuff but most because of Earth stuff. Observant, thinking humans acknowledge that Earth’s surface stuff is growing warmer. Even indifferent humans acknowledge that humans have accelerated warming with excessive release of Carbon into Earth’s atmosphere and oceans. As Heraclitus suggested above, if you do not expect the unexpected, you will not recognize it when it arrives. Such is the case with carbon pollution, which arrived unnoticed and unexpected shortly after the Civil War.

The use of the word “stuff” is an important tool; viewing the Universe on the scale of normal human cognition quickly exaggerates the importance of human stuff. It isn’t really important at all – except to humans. Similar to ants, reality is greatly distorted by personal experience. Brazilian farmers continue to deforest the Amazon rain forest despite the suggestion that removing the forest will change environment stuff. The farmers’ reality is distorted by personal gain; they are incapable of expecting severe changes in their weather so the true scale of their reality is much like an ant’s. On the scale of Universe stuff, ants and humans are closely related.

Humans keep track of mathematical versions of stuff. An arctic fox may have a sense that it is unusually cold but it seems not to care that not only is it unusually cold, it is minus 120 degrees Fahrenheit cold – now that’s cold! Humans mathematically track a lot of phenomena about other stuff; that’s how humans know the environment is growing warmer on Earth’s surface.

A reputable scientist wrote an article in Atlantic Magazine about a year ago. He was ridiculing humans’ plan to reverse climate change: “They think they will fix the problem in a lifetime or two. What they can’t see is the scale of global warming. It may take the Earth 30 thousand years to reset its global environment!” Many scientists agree and also believe that the Earth will enter a long ice age at that time. Each set of stuff has its own scale of size and time. We forget how small human stuff is when compared to environment stuff and Earth stuff. A simple example is we count our lifespan in years; environment stuff easily can count lifespan in centuries, i.e., how many years does it take for the Fertile Crescent to come and go through a desert cycle? Earth counts lifespan in eras; an era has two or three cycles called periods – the length of time during which rock formations appear, e.g., the Rocky Mountains.

If human stuff is messing around with Earth stuff, the results may take so much time they never will be known. On the other hand, looking down the scale of different stuff, say solar system stuff messes with environment stuff, things can change rapidly. Remember the meteor that helped wipe out the dinosaurs? That meteor may have been floating around the solar system’s inventory of asteroids for billions of years then POP! If we had been alive at the time, we could have watched the entire global environment change within a week.

Mariner can hear the reader complain, “What’s all this stuff about? What’s the point?” This always happens when Guru is allowed in the room. What it’s all about is that the twenty-first century confronts humans in a new and unpredictable way. Like the ants, Earth stuff is changing our reality: our comfortable rock has been lifted to expose new, larger issues that force H. sapiens to realize it is not as much in charge as it thought. Further, time is short enough to be relevant to our psyche. Stephen Hawking is confident H. sapiens will be extinct within ten thousand years. Our line of ascendency began nearly 90 million years ago as a simple primate. We’ve only 10,000 years left to come to terms with the relative value of our messy human stuff as a part of Universe stuff. One example: Are we a benevolent species or a predatory one?

Mariner’s in-laws, nine cousin families strong, are celebrating their eighth quinquennial this week. Posts may be scant during that time.

2 thoughts on “Humans are not Creators, they are Stuff”