From when he was five years old, mariner still has a few memories. The war was still on. He remembers city blackouts and fearing a bomber was coming until he could discern it was just the train at the end of the block. He remembers his mother having him stand on the bed so she could dress him special for the first day of kindergarten.

He remembers being given the chore of washing the breakfast dishes. This was accomplished with two pans of water on the kitchen table, one soap, one rinse. Once in a while he was given a scrub board to wash a few clothes in the basement washtub.

He remembers eating fried liver with onions, SPAM and bread and gravy for dinner. Mariner also had a sense of ‘everybody was the same.’ Everyone took public transit; everyone walked to the nearest retail center; each weekend was a party in the basement for friends, family and servicemen. There was a consciously accepted sense of ‘we’re in this together’.

Mariner remembers racing down the stairs barely awake to retrieve the two thick Sunday papers from which he scarfed a library of comics. He remembers utilizing patterns in the living room rug to play with his toys while his grandmother listened to Fibber McGee and Molly on the radio.

Everyone took public transit because gasoline was rationed to a maximum of three gallons per week (cars in those days were lucky to get twelve miles to the gallon).

James Fahy, an author of the period, wrote, “Nothing unites humans like a common enemy”.

Alas, jumping to the 21st century, Pogo Possum, the great comics philosopher was right when he said: 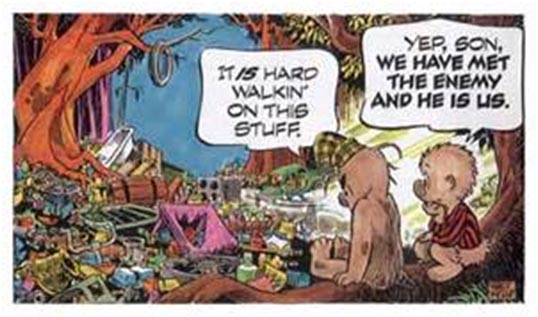 Is it any wonder that oldsters just can’t seem to grasp contemporary values? Mariner’s grandchildren play with imitative smartphones and laptops instead of listening to the radio. Having one truth in the war years was easy albeit critical – the enemy was Germany. In this century, truth is ill-defined if it can be defined at all. Who tells us truth – Musk? Tucker Carlson? Zuckerberg? Bernie Sanders? Marjorie Taylor Green? Science? Evangelical preachers? The Proud Boys? Google?

What Kitchenaide is to mixing, social media is to common truth.

An oldster who grew up learning the virtues of dishpans, scrub boards, walking to a real store and SPAM does not understand how the world works today or conversely, why it doesn’t work.

By principle, this makes old people Luddites and of no value to problem solving in this alien world of the 21st century.

Vote old people out and young people in. Elect millennials and Zs.

3 thoughts on “Then and Now”