Mariner grows disinterested after hearing hour after hour day and night the same statistics, speculations and campaign ads intent on assassinating the character of the other candidate. Today he focused on the rest of the world. He should have stayed home.

We live in an age of rapidly growing nationalism. Most countries have had a form of nationalism but today it is the democratic nations that are switching rapidly. To name just ‘a few’: every member of the European Union (EU), most dramatic are England (Brexit), Poland, Hungary, Serbia, Turkey, Greece and Germany – just a quick list. South America is awash in nationalism with Brazil and Venezuela in great disarray. Central America has long had several abusive, crooked governments but even there dictatorship is on the rise.

Drivers of nationalism include a slow economic recovery, an increase in people displaced across borders, and anxiety about terrorism, according to Harun Onder, an economist at the World Bank. Another factor, which perhaps is not as appreciated, is age. Many rich nations are in the grips of a big demographic shift toward older populations, and aging populations experience economic pressures that can lead to more nationalistic tendencies. Most frightening is that the newly elected nationalists in these democracies act and sound exactly like Donald! Racism and religious oppression are rampant around the world and are used to incite even more fear in stressed populations. 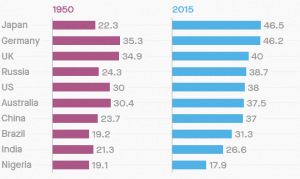 On a more theoretical level, our global economy is 170 years old and shows signs of wear as oligarchical practices gather more and more wealth to fewer and fewer people. In the US, despite apparently good unemployment statistics, general wage levels are half of what they would be if wages kept up with inflation. Corporate power expands ever more rapidly as new digital technologies emerge.

Regarding migrations, mariner has noted that major migrations occur periodically throughout history. Humans moved out of Africa because food was becoming scarce; two very long droughts drove large numbers of humans further into Europe and Asia. Today, the reasons are war, violence and abject poverty. Ironically, the human population is growing to such an extent that soon there will be no room to migrate.

Global culture is in a state of severe turbulence. Change is everywhere and in everything. Is nationalism a solution? Is nationalism similar to a storm cellar during a tornado? Can democracy survive during hard times; during times of uprooted society and morality? Coming back to the US this evening, mariner is concerned about the state of western society. China may not know what it is getting into.