A few North American Indian tribes invented a jewelry that could double as money. It was called wampum and was made from small, polished pieces of seashells. It was 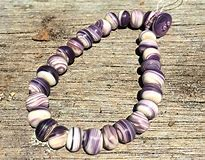 managed in several ways. It was jewelry as the picture shows; often it was kept in long belts and was used in the way rosary beads are used today although the wampum belt was more a family history than a religious tool. Also kept in belt form, individual wampum could be slipped off as a form of cash; the intrinsic value came from its attractiveness as jewelry and the time and labor it took to convert clam shells to wampum. These belts were the first wallets in North America.

Wampum was traded or given between individuals directly. There were no banks. Interestingly, the citizens of Kenya in 2007 became the first country to launch ‘mobile money’ transfer service through a cell phone provider that plays the role of a money exchange. Swapped phone to phone, no bank is necessary.

The banking industry is very concerned that smartphones could perform a similar exchange and would not need banking services. The current market is encouraged by banks to use the ubiquitous credit card which places the bank in the middle of every transaction. Banks also handle credit not just for retail but for massive loans to corporations. Naturally, banks, like any broker, sit between two parties and have ingenious ways of culling a ‘few’ dollars from both parties. Don’t get Elizabeth Warren started!

In 1933 banks, investment banks and insurance companies were broken apart[1]. One corporation could not operate more than one function. This was done by the government to control manipulation between functions to make banks seem like they had more assets than they really had. In 1999, the banks, long complaining about the breakup, finally had that legislation overturned. By 2008, nine short years, the bank industry collapsed, causing a lot of people to lose a lot of money especially in real estate. The US had to restart the banking industry by giving banks 700 billion dollars. Don’t get Elizabeth Warren and lots of every day Americans started!

Many readers will remember the Savings and Loan collapse in 1989. Recovery cost the nation 160 billion dollars. The cause was a combination of constraints in the amount of interest banks could charge on mortgages while inflation rose to 18 percent by 1980.

The banks have been meddling with another economic function in recent years: they are sharing financial information with big data. So banks have the new ability to know what a person spends money on, what their financial habits are and whether a person is susceptible to a marketing scheme or conversely not a good risk because they ate bacon for breakfast. Don’t get Elizabeth Warren and a lot of privacy advocates started.

Break ‘em up! As to retail transactions, why are they called ‘smart’ phones? The Kenyans know.