Many years ago, when mariner was learning about world religions, he learned that the land called Turkey today in another time was the origin of virtually every political and religious principal in the western world. Even revered early Greek poetry and Greek philosophical wisdom is rooted in the Hittite Empire. 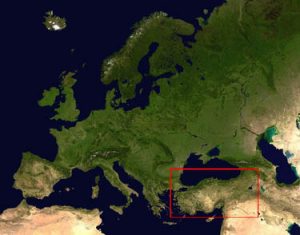 The land of Turkey is also called Asia Minor or Anatolia. Anatolia, the cultural name for the area, has been the intersection of civilizations since the beginning of political organization. Babylonian documents note Hittite dominance in the region as early as the 17th century BC. Anatolia was the first region in the world to use iron tools, transforming its culture from Neolithic to Iron Age. These changes occurred between 4500 and 2000 BC. Given the Hittites existed at least by 1800 BC, we’re talking really ancient history – which is the point of this post, that aside from not assassinating each king to make room for another one, generally speaking, there isn’t much that’s original in politics. The last somewhat original idea was in the 18th century when the United States decided to let the citizenry run the country.

Today there is an urgent need to reinvent human culture; computers are forcing us into the future. We have no choice: we are facing new rules, new attitudes and new definitions, ergo new politics. When iron was mastered, it changed war, it changed agriculture, it changed politics, and it changed day-to-day life.

So here we are 3,800 years later. We suffer the end game of two ages at once: fossil fuel and a stable mammalian age, and the beginning of a new age – not iron, computers.[1]

Simple ways a new computer age will be noticed:

Today in 2017, 40 out of 100 car drivers drive alone. Almost as many use transit. Only 4 in 100 carpool. Some say the electric car will save the single passenger preference. Some say the electric car will be controlled by the highway just as traffic lights control traffic today. Cars using major highways may be little more than a seat, a cab and some wheels and be hooked electronically to the car in front and the car in back. Toot-Toot!

Another option mentioned is that a driver will pick up a specially built car at a depot like Hertz. Otherwise, one can drive the old clunker but not very far before one must take light rail.

Already emerging are neighborhoods or converted small towns that are designed to accommodate all the needs of a resident. Cars will be unnecessary within the confines of the neighborhood. Any storefronts that still exist will deliver to the home. Amazon will provide everything else.

One of the significant changes will be the definition of work. We aren’t making all these computers for nothing! Several books have been written about this subject and every significant magazine has published articles. A common observation is a description of the dream of every human being: independence and financial security. The way computers are taking away jobs, we all may be independent so financial security can’t be based on human labor or clock time. Whence one’s income?

Hmm, will one be able to vote from home? Miracles can happen….

[1] Fossil fuel is widely assumed to be the cause of climate change. Carbon emissions certainly have exacerbated global warming but the planet has its own life to live and is by itself growing warmer. Much more damaging, and far enough along that it is irreversible, is the mammalian issue – caused entirely by human practices of blatantly destroying habitat and over consuming food sources like fish. Compared to air pollution, the ocean is in worse shape. We are living our way to the Sixth Extinction.