Today’s post is a reprint from June 14, 2015. Mariner rarely if ever has republished; a reader can always browse the categories. This post was the first in a twelve part series of posts about individual advocacy, how advocacy is an ingredient in a satisfying life and a means of bringing order to that life. He feels the subject of personal advocacy provides a healing salve for the turbulent times everyone experiences today. The series deals with the relationship between mankind and his environment, treatment of animals and pets, how he should eat, and what can a person do at home that promotes order and personal meaning.

Standing in the Penumbra of Advocacy at Home

Penumbra is the word of the day. The mariner doubts it will be replaced by “get” or “got.” The general meaning is to stand in the shadow of something. More than just a shadow, it alludes to a shadow that doesn’t have an edge like a person’s shadow or the shadow of a building. An example may be an eclipse or, on a sunny day, standing beneath an altocumulus cloud – high enough that its shadow line is diffused by the time it reaches the ground.

It is the appropriate word for our thoughts about the Advocacy at Home (AH) series of posts. AH sets an advocated form of behavior; it sets standards for that behavior. AH is, in fact, a law book. It is a law book without an end.

Referenced in the post, Po Pouree, from letters to the editor in Scientific American, Robert E Marx responded to an article about why Neandertals became extinct (apologies for repetition of earlier posts):

“Kate Wong’s suppositions about what brought about Neandertals’ extinction in “Neandertal Minds” are contrary to the known history of anatomically modern Homo sapiens [that is, us]. Her assertions that Neandertals were just out competed and that the 1.5 to 2.1 percent Neandertal DNA within people outside of Africa is the result of occasional “dalliances” would be historically unlikely.

The most likely scenario would involve waves of immigrating anatomically modern humans taking over land and causing death by plunder and disease, as Europeans discovering the New World did. And it would be naïve to think that our Neandertal DNA was the result of consensual dalliances when rape went hand in hand with pillage of every other civilization.” 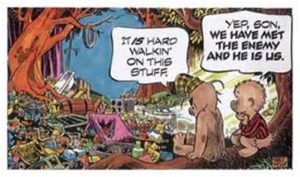 To read other parts of the advocacy series type ‘advocacy’ in the search box on the Home Page.